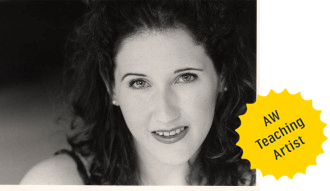 A native New Yorker, Suzi is passionate about sharing her love of dance with members of the community.  Specializing in international dance styles, Suzi's programs can be tailored to any curriculum to satisfy arts integration requirements and standards.  Her exciting dance and theater programs are appropriate for all ages, children through adult.

Suzi has studied international dance styles with experts from around the world.  Styles include Irish Step, Scottish Highland, Hawaiian hula, Russian, Ukrainian, Mexican, West African, Italian, Appalachian clogging, swing, Latin dance styles, Chinese, and Eastern European.  Suzi studied acting at the Lee Strasberg Theatre & Film Institute and improv at Chicago City Limits.  She is co-founder and Company Manager of World Dance Theatre, a not-for-profit professional dance company, and she and her colleagues strive to bring the beauty of international dance and music to a wider audience.  She also graduated summa cum laude from John Jay College of Criminal Justice with a degree in International Criminal Justice.

Suzi has extensive experience in arts integration, having participated in arts integration workshops developed by the Kennedy Center for the Performing Arts, and having 20 years of experience as a teaching artist.  Her recent residencies include international dance instruction for K-8 at schools in New York City, New Jersey, and throughout Westchester.  Residencies are used to augment the curriculum, such as instruction in dances from Spanish speaking countries to support Spanish language classes, and dances from countries in the eastern hemisphere to complement social studies.  Suzi also has worked extensively with children and adults with special needs, having conducted movement and music workshops throughout New York.  In 2008, she participated in the Special Education Artist Academy with Arts Horizons, a program that brings music and dance to children with autistic spectrum disorder in New York City schools.  Suzi also teaches acting and improvisation to students of all ages.  She has been on the staff of the Purchase College Summer Youth Theatre program as improv instructor, dance instructor, and stage manager since 2001. Suzi is also a licensed fitness instructor, teaching dance-fitness programs throughout Westchester.