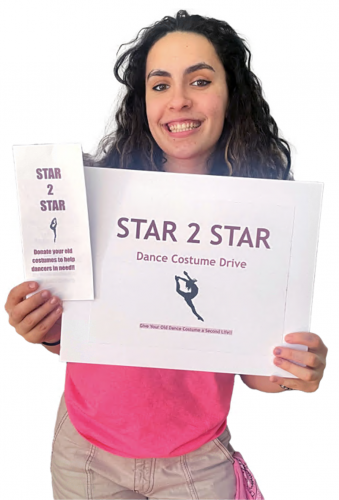 Croton-Harmon High School student Isabel Lavery has been dancing since she was four, and has the costumes to prove it. In fact, she says she has piles of old costumes, each worn only a handful of times, just collecting dust. And she knows she’s not the only one.

Lavery decided to do something about those accumulated costumes. As the pandemic and inflation have made finances difficult for some families, she created Star2Star, a dance costume drive to collect new and gently used costumes, which she plans to donate to local dance schools. Her goal is for students to perform without worrying about the associated costs.

This sentiment rings true with Genia Flammia, Board President at Youth Theatre Interactions (YTI), one of the schools to receive donations from Star2Star. “We find that some parents are reluctant to participate in performance-based programs because they anticipate added expenses for appropriate attire and costumes.” Flammia explains that the donations will also help YTI to expand its programming with offerings like costume design, “thus providing a more holistic approach to the performing arts.”

Marion Archer, whose The Revelators Dance Troupe will also benefit from Star2Star’s donations, adds: “In our hard economic times, it is hard for young people to afford dance clothing. This donation will help to defray much of the cost for the dancers’ outfits and shoes.”

Lavery, who has trained and performed with the American Ballet Theater, Bolshoi Ballet’s Summer Academy and more, says that she “wants to share with others what [she] has been blessed to have as a dancer.”

“I want to get rid of barriers that prevent young dancers from moving forward… Knowing that someone is supporting you is everything sometimes. It can give you the confidence you need to step on stage in front of an audience and shine.”

Star2Star will collect lightly used dance costumes for all genders and age groups, as well as leotards that are in good shape. Marked collection bins can be found at Repertoire Dance Shop in Scarsdale and Ms. Dancewear & Footwear Boutique in Mohegan Lake. Donations will be accepted through Memorial Day so that costumes can be allocated before year-end recitals in late spring.

Lavery says: “I want dancers to remember that we can feed as well as be fed. Donating your once-worn costume…adds a link to the chain of support that the dance community relies on.”