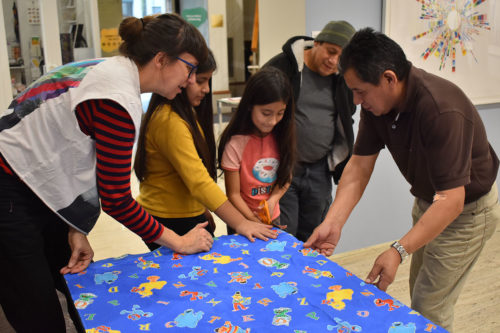 “The unveiling will be a time for us all to get together outside and bask in our awesomeness,” says textile artist Amanda Browder. The artist is looking forward to the big reveal of her Metropolis Sunrise project this fall. The artwork has been five years in the making, but Browder’s excitement isn’t only for herself. With her guidance, the project was constructed by more than 700 participants in the local Westchester community who all helped to donate fabrics and construct them into a large-scale work of public art.

This considerable undertaking will result in a massive installation that will be draped over the front of ArtsWestchester’s nine-story Mamaroneck Avenue building in White Plains. The unveiling will take place in style – during Serious Fun Arts Fest, a five-day arts festival set to take over the city’s downtown this October.

Discussions for Metropolis Sunrise began in 2017 and was subsequently commissioned by ArtsWestchester.  It opened to the community in early 2019, after which nearly two-thirds of the project’s goal – 10,000 square-feet of fabric – was sewn together before the pandemic began and halted progress.

According to Browder, it is important for the project to now be finished – “both as the realization of the original intent, but also to not lose the investment that community members made to the piece pre-Covid.”

Two years later, and over the next several months, “Public Sewing Days” will resume, during which groups of community volunteers will come together to organize, pin and sew monochromatic stripes and shapes for the larger fabric installation. “I am so happy that we are able to return and finish this work as a symbol of resilience,” says Browder.

Upcoming Sewing Days in ArtsWestchester’s White Plains gallery will take place on July 16, 20, 27 and 30. These will be followed by additional days in August to take place at partner locations within the community. As Browder explains, a key message of the piece “is that a community can come together and participate in the creation of that community’s public art.” No experience is required to participate.

Each swatch of fabric used in the piece has a story – and ArtsWestchester has made significant efforts to gather that collective history through written testimonials, a storytelling podcast and recordings that have allowed people to contribute their own familial, societal and cultural histories into this living work of art.

Ireland native Regina Farrell-Fagan reflected on her grandmother’s rag rugs and the history of lace in Irish and Irish-American communities. White Plains resident Fatiha Makloufi is connected to a long lineage of independent seamstresses in Algeria. Diana Loja talked about family connections to sewing and tailoring in Ecuador. Mother and daughter Alayne Fitzptrick and Karen Davern discussed mask-making during the pandemic.

“The stories and memories are just as important as the fabric that is sewn together in this piece,” says Browder. “They will be conceptually woven into the new history of this project.”

The unveiling coincides with the opening of ArtsWestchester’s fall exhibition, Social Fabric: Common Threads and Uncommon Visions. The exhibition features recent works and site-responsive commissions by New York-area artists who use textiles and fibers to explore issues of broad social consequence.

“I can’t wait to celebrate the participation of the citizens who donated fabric, pinned, sewed and shared their story… and see how each person finds meaning in the beauty of this project.”