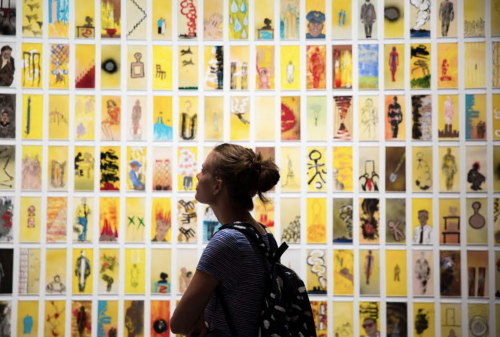 On September 11, 2001, artist Manju Shandler was walking her dog in Manhattan when she heard the news. “A woman ran into the street and began stopping cars to tell people something,” explains Shandler. “She ran up to me [and said] ‘A plane flew into the World Trade Center.’” Shandler went home and turned on the news moments after a plane hit the second tower.

Several days later, Shandler returned to her studio, put aside the project she had been working on, and set off on a project that would end up yielding nearly 3,000 paintings. The collection of four-by-nine-inch paintings cumulatively became “GESTURE,” a memorial dedicated to those who perished on that day. Each painting in the installation represents one person lost. The final installation would take about four years to complete.

Over the years, some of these works have been displayed in the New York Times and at the National September 11th Memorial & Museum in Manhattan. Now, as the twentieth anniversary of the tragedy approaches, these works are on display at Pelham Art Center. The exhibition, on view through September 18, offers a tangible representation of the overall magnitude of this historic event. Overall, the installation covers 1,600 square feet of wall space.

Back in 2001, while listening to the radio for news updates, Shandler began doodling.  Although she used photographs from newspapers and magazines as inspiration for the painting, there aren’t many literal portraits in the series.

“A lowercase ‘i’ became a shorthand for a figure, a way of quickly representing the mind and the body through an empathetic visual communication.”

The works range from ominous to uplifting. In one painting, a shadowy figure in a suit, with no distinct facial features, stands in front of a foggy red background. In another, a yellow hue is interrupted by abstract structures and a group of figures standing together in the forefront. Others feature billowing smoke, figures embracing, and first responders. All are painted on polyester film which, Shandler explains, is “durable, versatile and allows for a wide range of styles and coloration.”

The Brooklyn-based artist says that creating the installation “became a type of meditation and therapy” for her: “It was a way to exercise the sadness, rage and helplessness. It was a way to answer that feeling of loss with the tools of being an artist.”

Pelham Art Center will host a public meditation inside its gallery on September 11, when visitors will be invited to participate in a silent group meditation. In the Center’s courtyard, guests can share their reflections and experiences.

“Twenty years later, it is an honor that this work is still meaningful to people and that my ‘gesture’ is something that is still being exhibited.”

You May Also Enjoy: