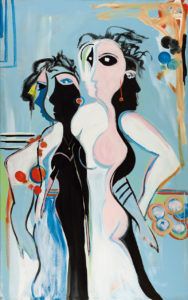 The thematic structure of Steve Lyons’ “Women in the Abstract” exhibition lies in the language. By adding “the” to the title, Lyons creates another layer to the show, a conceptual abstraction that dimensionalizes the paintings and sculpture on view. The exhibition will be on view at Iona College, Tuesday, September 3  – Thursday, October 4.  Opening Reception and Gallery Talk, Wednesday September 11, 11 a.m. – 1 p.m.

Lyons’ paintings of women are some of the most collected of his figurative work, highly prized for the expressionists rendering of the “energy” his female figures exudes. Says Lyons, “For me, it is important that figurative work captures the dimensionality of the subject, and by that I don’t mean the physicality created by highlights and shadows. We, as people, are more than that: we are energy, thought and expression. Thus, my works simultaneously reflect the psychological dimension of numerous female subjects as well as the totality of their being as I experienced the actual person or a concept regarding the female subject.

Lyons’ career was launched in 2011 when he was discovered by an international art critic as he sold small seascapes on scrap lumber off his front porch on Cape Cod. Though he did not know it at the time, he was in the first stages of re-inventing the Italian technique called impasto in what many cultural writers now call his “sculptural paintings.”

In 2016 Lyons was named number two in the world by the American Art Awards for abstract work for his painting “Women in the Universe.” Part of the Rollins’ private collection, it will be on display at his Iona College show. The show will also feature his unique sculptural painting technique with paintings such as “A View from the Stage,” “Family from the ‘Burbs” and others. In addition, Lyons’ show will also include works with his highly recognized gold, silver and metal leaf which he uses to create energized blocks of positive and negative spaces.

Lyons’ work has fast become some of the most recognizable on the contemporary art scene, and has toured extensively in Europe and the U.S. His work has also been featured in numerous cultural centers and regional museums in Berlin and Freising; Germany, La Paz, Mexico; Naples, Italy, to name a few. “Women in the Abstract” is his first U.S. university show and follows university exhibitions in Madrid. Most recently, he was selected as an individual exhibition artist at the Luxembourg Art Fair, and will debut in New York City the fall at the Gallery 104/ NYCArts complex in Tribeca, with a feature show of poured resin pieces and sculptural depictions of water. In 2018, he was named one of the top 15 artists in the world by Art Tour International Magazine.

Below is a link to the Women in the Abstract catalogue.