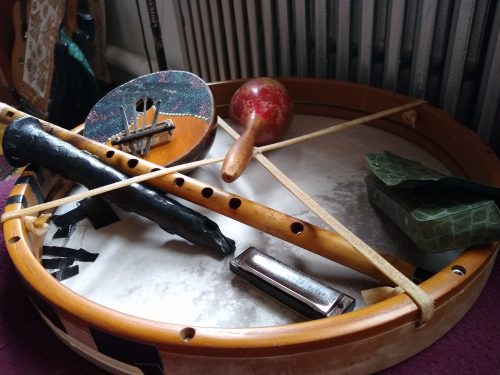 *Full time performance and enrichment programming for children of all ages, venues of varying sizes from 5 to 500 persons

*Presentation of songs and stories of various cultures and significant periods of musical history through the use of guitar, banjo, mandolin, ukelele,  percussion instruments, flutes,keyboard and harmonica, and of course voice

*Evolving client base of children and adults with special needs such as Autism, speech and language delays, and other behavioral, neurological and DDs.

*Responsible for 500% growth in business income over a  30 year period, including all marketing, networking and client contact and communication

*Toured the nation for three years as a main act, and as an  opening act  for nationally recognized rock and roll artists

*Released an MTV video which was directed by the son of Bob      Dylan, Jesse,  and aired for two months on â??120 Minutesâ??, a well     respected  alternative video compilation

May 1984 - June 1986:   Performed and composed music in NYC as a struggling guitarist for too many bands, while maintaining a day job as a Consumer Marketing Consultant for two pioneering Music Video concerns, Video Arts International (VAI), and DCI Music Video.  VAI specialized in operatic and ballet re-releases of previously recorded broadcasts, and DCI was/is an instructional music video company.     O

*Rain Deputies-hailed as Westchesters best independently released band in the mid-90's, Rain Deputies released two self-produced albums and was invited to perform at SXSW (South By Southwest), the souths hippest gathering of new bands, and at CMJ, New York City annual week of important new talent in the college listening world.  CMJ (College Music Journal) picked Rain Deputies as a hot pick of the week during this time

*Tumbleweed Mile-this trio is the most current group performing  the songs of Chris Merola, with a recently released CD entitled "Paint the Morning Gone"

Recordings: this partial list includes only those recordings made commercially available through national or independent distribution outlets

*Astral Knot, Unititled, Minmaster Studios, due for release in fall 2004

*AM Gold, Untitled, Minmaster Studios, due for release in fall 2004