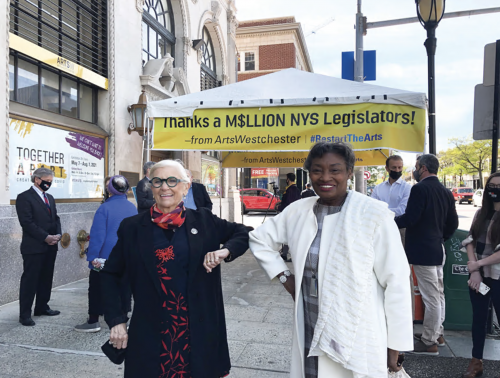 Everyone remembers how New York was hit early and hit hard. No “orderly” closure, no time to think. Into lockdown we went: disinfecting surfaces, washing hands, wiping down groceries.

Shockingly, Westchester Broadway Theatre in Elmsford folded early. Teaching artists everywhere were laid off.  Artists and arts institutions were out in the cold, and nobody argued—people were dying.

By the spring of 2021 the arts community was on its knees. A year of earned revenue was nearly nil. Boards and donors were loyal and generous, but some wondered: what was left to support? Would audiences return? Could arts groups recreate magic on their stages? Could genius be restored?

ArtsWestchester asked the arts community of Westchester and Rockland—individual artists and organizations small and large—”what do you need?”

We needed work. Except for artists already working digitally, our venues were dark. Schools were either closed or allowing core staff only. Work with the elderly was too dangerous.  Docents, projectionists, stage hands, box office teams, fundraisers, custodians, cellists, receptionists, actors were all stopped in their tracks. We needed audiences, projects, pupils—and they needed us.

Need actually spiked. We were socially distanced and increasingly divided.

The pandemic and all that swirled around it made us thirst for the arts more than ever, to recover our own threatened humanity. COVID-19 and other ills reminded us what makes us human, both in frailty and artistic aspiration. We needed joy, justice, connection, cultural expression, beauty and inspiration as never before.

Federal programs helped, but criteria was tight. The paycheck protection program worked only if your payroll was intact. Shuttered venues helped if you had the right number of fixed seats. Most were ineligible.

A Savior in a Scarf

New York State Senate Majority Leader Andrea Stewart-Cousins, in her signature scarf, stepped forward. Could she and our delegation of New York State Senators and Assemblymembers pull together and carve out $1 million to Restart the Arts? They did, and gave rise to an ArtsWestchester grant program inviting proposals from Westchester and Rockland arts organizations to recruit artists back.

Every proposal is a “green shoot” reaching up with promise. The best of them are being funded using the $1 million, and leveraging other support. Some projects rehire artists (together approximately 400), others reassemble audiences, and yet others reignite creativity. Some add resilience and bandwidth – dire needs, as the pandemic revealed. The proposals are as creative as our arts community—and many will enhance equity, diversity, inclusion and accessibility.

Omicron was a second gut punch, extending the pandemic for another year.  On the second anniversary of lockdown, we admit we’re still hurting. Many worthy proposals are going unfunded.

Another $1 million round of Restart the Arts is necessary to address the losses we’ve sustained—losses deepened by the second year of pandemic.

Momentum that stopped in an instant realistically takes years to regain. The arts are complex, beautiful, vulnerable. We’re not flipping a switch; we’re reanimating ourselves and our communities; restoring our humanity; emerging into post-pandemic possibilities.

As ever, the arts will draw forth what’s best in ourselves and each other, with empathy and mutual respect. Together, we can make a fresh start. Together we can restart the arts.

A version of this article first appeared in the March 2022 issue of ArtsNews, ArtsWestchester’s monthly publication. ArtsNews is distributed throughout Westchester County. A digital copy is also available at artsw.org/artsnews.​​​​