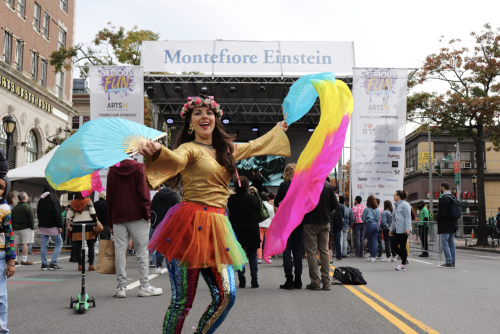 Last month, ArtsWestchester’s Serious Fun Arts Fest took over downtown White Plains with public art, gallery events, pop-up dance and theater performances, live music and family activities. The 5-day festival, which featured more than 200 artists, culminated in a headliner concert celebration with Brooklyn band Sammy Rae & the Friends. Visitors flooded in from the Metro-North railroad station, and local residents enjoyed the quality of life that comes with living in White Plains.  The festival was made possible with support from presenting sponsor Montefiore Einstein and a grant provided by Market NY through I LOVE NY/New York State’s Division of Tourism.

Although the festival has come to an end, the public art  will remain on view for the time being: murals will be in place long-term or for as long as the construction walls that they adorn are erect; sculptures will remain on view, in most cases, until the week of Thanksgiving. For more about this festival, visit artsw.org/seriousfunartsfest. For more photos, follow ArtsWestchester’s Instagram account.

More than 80 Artists on Display in Rivertowns

On November 5-6, RiverArts will once again present its annual two-day visual arts crawl. The 2022 Studio Tour, a self-proclaimed “treasure hunt through industrial lofts, home studios and galleries,” will feature more than 80 visual artists who live or work in the Rivertowns. Offerings include everything from the Sleepy Hollow Cultural Festival’s Celebration of Gratitude display at Sleepy Hollow Senior Center to the studios of 22 individual artists in their studios at 145 Palisade Street in Dobbs Ferry. Artistic mediums on display range from painting and ceramics to fiber and photography. No matter the chosen location(s), RiverArts encourages guests and collectors to meet the artists and explore their process and inspiration. The six participating towns include Ardsley, Dobbs Ferry, Hastings-On-Hudson, Irvington, Sleepy Hollow and Tarrytown. To plan artist studio visits, guests can use a Google or downloadable map.

Following three oversold premiere performances of his Choices: a Rock Opera earlier this year, the production’s creator, John Krupa, decided to “go deeper.” The rock opera’s creative team met with focus groups and ultimately decided to refine the production before kicking off a new local run of the show this fall. Choices: A Rock Opera follows the lead singer of a 1980s “hair band” through the choices he makes in life and how they affect his path forward. To further explore the characters’ emotional depth, the creative team worked with a licensed psychiatrist “to help better understand why the characters might do what they do.” To give greater clarity to some storyline elements that were initially left ambiguous, six new songs were added, each providing more backstory and explanation. The next performances of Choices are on November 11-13 at the Chappaqua Performing Arts Center.

Jacob Burns Film Center (JBFC) recently announced the appointment of four-time Emmy Award-winner Ryan Harrington as its Director of Film Programming, Curator-in-Chief. Harrington will be responsible for “guiding and overseeing the curatorial vision at JBFC alongside a team of programmers, and will collaborate closely with all departments to further engage the film community and attract new audiences with vibrant and diverse programming.” Harrington has an extensive career in the film industry. Previous roles include Vice President, Documentary Films at National Geographic/Disney+ and Vice President, Artists Programs at Tribeca Film Institute. Says Harrington: “This opportunity is a culmination of my many years dedicated to supporting filmmakers and giving a platform to unheard artistic voices. I recognize the need to not only engage and diversify our local in-person audiences, but also amplify voices within the global filmmaking community.”

When Business Council of Westchester President Marsha Gordon, is not advocating for businesses in the County, she can be found at the cinema or theater. Read Marsha’s reviews on ArtsWestchester’s As a Matter of Art blog: artsw.org/artsblog.

This Tyler Perry movie is a poignant movie on so many levels.  A past in which brothers were pitted against each other in childhood ultimately leads to dire consequences later in life. Their mother is torn by her love for both of them, but is fiercely protective of the more vulnerable of the two. The story, which takes place in the 1930s Deep South, also tackles a forbidden love that is not able to be realized by a society that doesn’t allow for interracial relationships of any kind, a professional manager from another country who creates success in spite of his own heartbreak and, ultimately, life lost because of bigotry, hatred and ugliness. This is a rough movie, but one that was well done and meaningful.

Gain valuable experience in a fast-paced and creative environment through an internship with ArtsWestchester this Winter/Spring (Jan-April). Deadline: January 1, 2023. To learn more, contact [email protected].