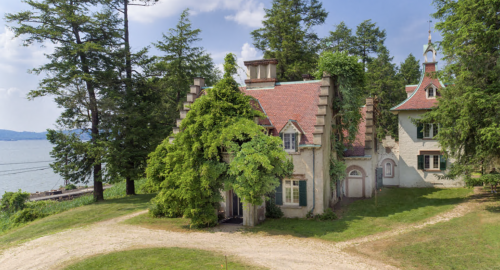 Historic Hudson Valley has recently reopened four of its National Historic Landmarks to the public – Philipsburg Manor, Washington Irving’s Sunnyside, Union Church and Kykuit, the Rockefeller estate. Philipsburg Manor, which has undergone a recent multi-million-dollar restoration, transports visitors to the 1750s, where they learn about the manor house, as well as its 23 enslaved individuals of African descent. At Sunnyside, visitors explore Washington Irving’s cottage and its grounds, which were designed by the The Legend of Sleepy Hollow author himself. Union Church of Pocantico Hills is home to nine stained-glass windows by Marc Chagall, as well as the last commissioned work by Henri Matisse. The Kykuit Rockefeller estate features a modern and classical art collection and expansive gardens.

New York Foundation for the Arts (NYFA) has opened a new cycle of its national Rauschenberg Medical Emergency Grants program for artists. These grants of up to $5,000 support direct treatment expenses for medical, dental or mental health emergencies that occurred October 1, 2021 or later. The deadline is June 7. Artists practicing in the visual arts, film/video/electronic/digital arts and choreography are eligible. Guidelines, an informational video and the online application are available on NYFA’s website. This program is open to artists living anywhere in the U.S., its territories, tribal nations and the District of Columbia.

Artist Jeila Gueramian has created playful site-specific installations as part of a partnership between Katonah Museum of Art (KMA) and Katonah Village Library (KVL). The programming collaboration, “Sparking Creativity in Community Spaces,” is designed to help remedy the impact that the Covid-19 pandemic has had on the learning, creativity and emotions of children and teenagers. Gueramian, whose works are hand-crafted from recycled textiles, has concurrent installations at both locations. The whimsical and interactive environment created in KMA’s Learning Lab,  Let’s Step Inside, dovetails the Museum’s spirited Constant Carnival exhibition. At KVL, visitors can find Gueramian’s creations surrounding the library plaza and into the entry through June 26.

Katonah Museum of Art (KMA) recently announced the appointment of Michelle Yun Mapplethorpe as its next Executive Director. Mapplethorpe comes to KMA from Asia Society, where she worked for over a decade, most recently as Vice President for Global Artistic Programs and Director of the Asia Society Museum. In this role, she “spearheads the organization’s arts and cultural initiatives…across its 14 global centers and oversees the Asia Society Museum’s collection, exhibitions and interdisciplinary programs, as well as its financial, administrative and operational functions.” According to KMA’s president, Vida Foubister, Mapplethorpe’s “energy, collaborative spirit and curatorial acumen will help forge a program of depth and quality that will deepen the KMA’s ties within [its] community and throughout the broader arts landscape.” Mapplethorpe will begin her tenure at the KMA on August 15.

Yorktown has announced the upcoming renovation of its Albert A. Capellini Community & Culture Center and Yorktown Stage, a complex that dates back to 1917. The Town acquired the building in 1979. The new $1.2 million project will bring upgrades to the building, including a new roof, new air conditioning and heating equipment, new seats in the Yorktown Stage’s theater, and more. Says the theater’s artistic director, August Abatecola: “This isn’t the empty ‘supporting the arts.’ This is securing the future of the arts and the future of the theater.” Councilwoman Luciana Haughwout adds: “We held on to something that we knew had value, not only for the community but for those who are struggling to express themselves.”

Fine art portrait photographer Nancy A. Scherl, president of the board of the Katonah Museum Artists’ Association, has recently released a photography book with Daylight Books. Dining Alone: In the Company of Solitude explores the topic of solitude by highlighting the experience of being alone in public. The book is the result of a project that spanned three decades, culminating in 2020 with photographs taken during the COVID-19 pandemic. Says Scherl: “Perhaps dining alone during the pandemic reminded us all that we were very much connected to each other despite our keen awareness of being isolated.” Fifty percent of the book’s proceeds sold directly by the artist will benefit two charitable organizations, CaringMatters and Jasa.

Avports Vice President Pete Scherrer has shown a longstanding enthusiasm and dedication for ArtsWestchester’s annual golf outing. In fact, this type of support has helped to guide it into one of the organization’s most successful fundraisers. This year, ArtsWestchester is honoring Scherrer for that continued support. The day-long June 21 event, named in memory of former Westchester Magazine publisher Ralph Martinelli, will host Scherrer and other arts supporters in a new venue. Golfers will gather at Armonk’s Whippoorwill Club for an afternoon on the course and evening reception.

At Avports, the company that manages Westchester County Airport, Scherrer oversees everything from lease negotiations and security to customer service and maintenance/construction…to say nothing of aircraft rescue, firefighting and emergency response.  As part of the executive team at Airport Management Services, he still believes that “people are what makes the airport run.” The same, he says, can be said for the golf outing.

Never too busy for a cause he believes in, Scherrer’s philanthropy doesn’t stop at ArtsWestchester. He also manages an annual raffle for the American Cancer Society that has raised more than $200K since 2006, and is actively involved with Guiding Eyes for the Blind.

When Business Council of Westchester President Marsha Gordon, is not advocating for businesses in the County, she can be found at the cinema or theater. Read Marsha’s review below:

The great joy of watching a new movie with my grandchildren is something that I hope to repeat time and time again.  This time, we watched Turning Red, which my granddaughter Mollie loved, as did I. Of course, Disney Pixar movies really tend to be geared toward adults — aka grown-up children. This one features a young girl with a strict upbringing who struggles with that “red panda” side of her that is fun, carefree and an adventurer.  Whether or not she chooses to embrace that panda ultimately is determined by how the other women in her family have dealt with their own “pandas.”  It’s better than this week’s therapy session: this movie that is seemingly for children made me think about those other sides of myself… and how my panda is expressed (or depressed).  As for Mollie, she did enjoy the songs, dance and flying pandas, as well as the gorgeous animation. After, she drew her first (somewhat-realistic) picture of a panda … and on the fridge it will go.