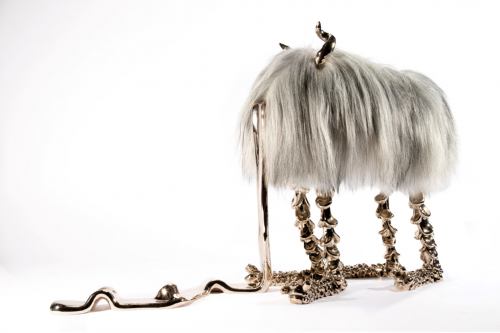 Haas Brothers, Horn to be Wild (image courtesy of Katonah Museum of Art)

It may be difficult for visitors to think of a more opportune time for Katonah Museum of Art (KMA)’s Constant Carnival: The Haas Brothers in Context exhibition to be on view. The show provides an oasis from the real world. On view through July 26, this playfully psychedelic display of works by the Haas Brothers encourages viewers to consider that joy and humor are still possible when creating new, more equitable worlds.

“You can either look at their artwork and get a fart joke out of it, or look deeper and get something more,” says

Emily Handlin, KMA’s Associate Curator of Exhibitions and
Programs. She explains that artistic duo Nikolai and Simon Haas want to break down hierarchies within the art world and museums. Simple emotions and pleasures can also be prioritized in these elite spaces.

Placing historical and contemporary works alongside one another, the show explores the history of the “carnivalesque” from the fifteenth century to the present. KMA divides works from the Haas Brothers, as well as a number of other notable artists, into two categories: “The World Turned Upside Down” and “Bodies and Boundaries.” The former features the brothers’ signature “beasts,” playful creatures that frequent their catalog. It also includes works from famed artists who played with inversion or surrealism, such as four selections from Salvador Dali’s series Fordali (Flora Dalinae). “Bodies and Boundaries” celebrates bodily expression and autonomy, exploring the realm of the profane.

The brothers’ works merge functional design and visual art. Amanda Seat looks soft enough to sit on. This beast’s Icelandic sheepskin resembles an alpaca in the form of an ottoman. In contrast, the brass bench Kiss My Brass! (2016) possibly wouldn’t be so comfortable to take a nap on. Their organic textiles, textures and forms invite viewers into a sensual world.

Receptive viewers may find humor and a justice-oriented politic in this visual aesthetic. Uruguayan master woodcutter Antonio Frasconi’s collection, while playful and cunning, addresses social and political mores of the mid-20th century, like racism, fascism and wealth inequality. For instance, his The Dog Hunter’s reversal of a pheasant hunt sparks a conversation about labor, vaguely recalling George Orwell’s Animal Farm.

Likewise, the Haas Brothers’ art doesn’t stop at whimsy. Handlin says they “push the limits of cuteness”: “They’re skilled at manipulating these forms for optimal emotional and empathetic response.”

They also use their commercial success to make tangible impacts in vulnerable communities. The beading in Fungi Richie (2016) demonstrates this commitment. In 2015, the duo began collaborating with the South African Xhosa female bead workers and women in California’s rural Central Valley. Through these partnerships, these women can become wage earners in their communities.

Recently, the brothers have also used their work to highlight existing stigmas in LGBTQ+ communities, particularly advocating for HIV/AIDS awareness. The seven brass hex tiles in their Advocates for the Sexual Outsider installation (aka the “Sex Room”) work to retool typical reactions to nudity or sexual pleasure, such as shame or self-consciousness. The artists urge viewers to be curious and find joy in the body’s natural inclinations.

“We invite everyone to explore their personal sexual definitions without the burden of social expectation,” they state in their Leather Manifesto: Advocates for the Sexual Outsider installation.  “We present sex as an extension of innocence, not a loss of it.”

On April 3, KMA will be awarding its annual Himmel Award to the Haas Brothers for their commitment to boundary-pushing art, process and ethos. The award, named for arts patron Betty Himmel, acknowledges distinguished creators who challenge society through art and design. The ceremony will include a conversation with the artists and a cocktail reception.

A version of this article first appeared in the April 2022 issue of ArtsNews, ArtsWestchester’s monthly publication. ArtsNews is distributed throughout Westchester County. A digital copy is also available at artsw.org/artsnews.