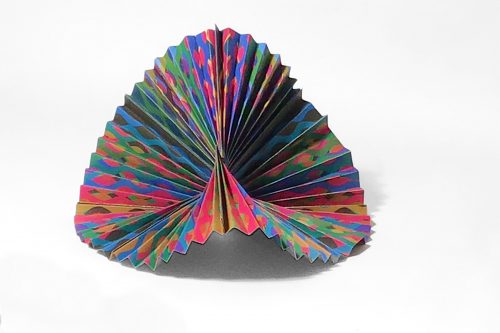 This past year, artist Luis Perelman took a radical departure from his usual two dimensional works with a new 3D process that he refers to as “folds.”

He discovered this process “by accident, like anything else in life.”

It all began with a series of digitally manipulated photographs of manhole covers. These pieces were kaleidoscopic with mesmerizing colors and complicated patterns.

Using the imagery of these printed photographs, Perelman began to experiment with cutting and weaving the various papers, breaking into the third dimension. These woven pieces became the basis for an exhibition at Upstream Gallery.

Folds will be on view November 4-28. Perelman’s latest works further embrace the use of the third dimension, and the exhibition features his latest developments in their full glory – new translucent materials, fine origami work, complicated geometric patterns, and hanging and spinning installations.

Perelman has been making art all his life. He has experience in a diverse array of media, having spent many years working in resin, and enjoying the process of mixing media such as painting, sculpture, assemblage, photography, collage, digital manipulation and metalwork. Perelman says his “approach to art is generated by the exploration of space and form.” His background in architecture informs his current artistic perspective in many ways, including his interest in geometry and patterns.

He explains that one thing that is very important to him is formal composition rather than representational depiction. Also of importance is “the ‘spiritual’ dimension of art, free from all association and reference. Specifically, the process of self-discovery, and the discovery of universal patterns and motifs.” Perelman hopes visitors will “get a sense of the variety of formal iterations on a theme.”

In addition to his artwork, Perelman is an activist who has been developing art and community in Westchester and Yonkers for years. Since co-founding the Blue Door Art Center nearly 20 years ago, he has yet to show his work in the space. He emphasizes that Blue Door was never meant to be a place to promote himself. He sees it not as his gallery, but the community’s gallery.

A version of this article first appeared in the November issue of ArtsNews, ArtsWestchester’s monthly publication. ArtsNews is distributed throughout Westchester County. A digital copy is also available at artsw.org/artsnews.​​

Previous post:
« NEW RECOVERY GRANTS HELP ARTISTS REENGAGE WITH THE PUBLIC
Next post:
ArtsWestchester Delivered 0,000+ to Artists During the Pandemic »