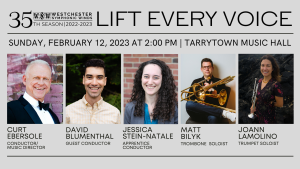 TARRYTOWN, NY – Westchester Symphonic Winds (WSW) opens the second half of its 35th Anniversary Season on February 12, 2023 at 2 pm at the Tarrytown Music Hall. The first concert of the new year, “Lift Every Voice,” is a unique program of music for wind band highlighting new compositions by American composers.

Celebrating its 35th anniversary, WSW highlights another milestone with its programming for the concert: the 50th anniversary of the publication of Sketches on a Tudor Psalm, by Fisher Tull. Other compositions featured on the program include works by Kevin Day, Jack Stamp, and Kelijah Dunton.

Curt Ebersole, conductor/music director, said, “This concert’s finale is particularly impactful. Omar Thomas used Lift Every Voice and Sing as the basis for Of Our New Day Begun, and it truly strikes at the very soul of our nation’s current struggle with equality.”

As the season continues, gifts in recognition of the ensemble’s 35th Anniversary can be made by visiting their campaign online at https://donorbox.org/wsw-35th-anniversary-fund.

Tickets for this performance are priced at $20 for adults, $15 for students and seniors, and free of charge for US veterans and military service personnel, as well as children under 10. Tickets may be purchased in person at the Tarrytown Music Hall box office, by calling 877-840-0457, or online at https://tickets.tarrytownmusichall.org/eventperformances.asp?evt=2680

About the Guest Artists:

Matt Bilyk has been performing and teaching in the tri-state area for over 30 years. Matt holds a BA in Jazz Performance from Manhattan School of Music. He has been an adjunct faculty member for many public and private schools throughout New Jersey, and he frequently serves as a clinician and festival adjudicator.

Matt is currently on staff with the Encore Music Program in Ridgewood, NJ and Elefante Music & School for the Performing Arts in New Providence, NJ. He also has a thriving private studio in Midland Park, NJ.

David Blumenthal is a member of the instrumental music faculty at Fiorello H. LaGuardia High School of Music & Art and Performing Arts, where he conducts numerous ensembles and teaches courses in music theory, aural skills, music history, brass techniques as well as a seminar in conducting and orchestration. Prior to his appointment at LaGuardia, he taught in Westchester County for three years as a band director at Harrison High School. Blumenthal began his career with the non-profit organization Education Through Music, and established a comprehensive music education program at P.S. 84 in Williamsburg, Brooklyn.

Blumenthal earned a Master of Music degree in wind band conducting from the University of California, Los Angeles and a Bachelor of Music degree in music performance and music education, as well as a B.A. in musical studies with a concentration in theory and history from the Crane School of Music at the State University of New York at Potsdam. His principal teachers were Travis J. Cross and Brian K. Doyle in conducting, Mark S. Hartman in trombone, and Timothy R. Sullivan as his thesis advisor for theory and history. During his studies at UCLA, Blumenthal served as assistant conductor for the UCLA Wind Ensemble, Symphonic Band, Brass Ensemble, and Symphony, and coordinated the UCLA Wind Ensemble Invitational and the UCLA Wind Conducting Workshop.

This fall, Blumenthal begins his fourth season with the Grand Street Community Band as Artistic Director and Conductor, along with serving on the Artistic Directors Board of the Metropolitan Music Community. This past season, GSCB was thrilled to welcome guest artists such as composer Anthony Barfield to collaborate on his piece Here We Rest, as well as the Hudson Brass, a brass quintet comprised of members of the West Point Band, to join GSCB in a performance of Bernstein’s Suite from MASS. During his tenure, GSB has been a commissioning member on Joel Puckett’s A Proper Goodbye. In addition to Blumenthal’s conducting obligations, in the Fall of 2020, he curated the MMC Music Education Forum, broadly built upon the ideas of promoting and fostering inclusion, diversity, equity and identity in our school communities and music classrooms.

David currently resides in Park Slope, Brooklyn with his fiancé Leah, and their two dogs Ziggy and Graham.

JoAnn Lamolino is the Associate Principal/Second Trumpet of the Hawaii Symphony Orchestra and Lecturer in Trumpet at the University of Hawaii. She is also a member of the Honolulu Brass Quintet, performing education programs and recitals throughout the Hawaiian Island Chain. While on the East Coast, JoAnn is a member of the Reading Symphony Orchestra in Reading, PA, often serving as Guest Principal. Other performance highlights include Tucson, Charleston, Baltimore, New Jersey and New World Symphonies, New York City Opera and most recently Acting Principal Trumpet with the American Ballet Theatre. In concert with Adele, Josh Groban, The Walkmen and on Broadway shows. As a soloist, JoAnn has performed at the Trinity Concerts at One Series in Lower Manhattan, RAI National Television of Italy, Charleston Symphony, Monmouth Symphony Orchestra and was a First Prize winner at the International Women’s Brass Conference. JoAnn has presented masterclasses at DePaul, Arizona State, NYU, Rutgers, University of Arizona, and Northern Illinois among others.

JoAnn holds a Master’s degree from the Manhattan School of Music and a Bachelor’s degree from Boston University. Principal teachers include members of the New York Philharmonic, Metropolitan Opera and the Boston Symphony Orchestra.

When not on the road or a tropical island, JoAnn can be found at home in New Jersey with her husband Edward Gattsek, a Music Educator. For more info, check out joannlamolino.com.

Jessica Stein-Natale is a  trumpet player and music educator born and raised in the Hudson Valley. Jessica is the 4th-12th grade band director at the Haldane Central School District where she directs five bands, a jazz band, coaches chamber music ensembles, and prepares students for NYSSMA Solo Festival. Jessica is the vice president of the Putnam County Music Educators Association and has served as Band Chair for their Junior High All County Festival. As a trumpet player, Jessica has performed in numerous musical theater productions with organizations including Brewster Theater Company, Marist College, and Yorktown Stage. She is the regular trumpet player for holiday services at Lyall Memorial Federated Church. Her music festival experience includes the Aspen Music Festival and she performed internationally with the American Institute of Musical Studies in Graz, Austria. Jessica studied with Ray Mase (American Brass Quintet) at SUNY Purchase for her Masters of Music. She graduated with her Bachelors of Music from The Peabody Institute of the Johns Hopkins University with a double degree in trumpet performance and music education under the tutelage of Joe Burgstaller (The Canadian Brass) and Edward Hoffman (Baltimore Symphony Orchestra). Jessica resides in Peekskill, New York with her husband Joe and their cat Mindy.

About The Westchester Symphonic Winds:

The Westchester Symphonic Winds is a 60-piece adult community-based wind and percussion ensemble, originally known as the Hudson Valley Wind Symphony. This year we celebrate our 35th season as the area’s premiere community band. We exist to promote music in our area, instill pride in our nation and heritage, provide opportunities for personal expression and growth within our membership, and nurture the love of music by offering an exceptional musical experience for people of all ages.

Over the years, we have given concerts on behalf of many service and benefit organizations. Our educational outreach program has included our Side-by-Side Concert with the Mahopac Central School District and our 2015-2016 Exchange Program with the Northshore Concert Band of Evanston, Illinois. The Westchester Symphonic Winds made its Lincoln Center debut at Avery Fisher Hall in 2010, performed at the Association of Concert Bands National Convention in 2012 and 2019, New York State Band Directors Association in 2017, and has performed at the Caramoor Festival annually since 2014. WSW was the winner of three awards in The American Prize competition for 2018-2019, including First Prize for Community Band. The organization is an Ensemble-in-Residence at the historic Tarrytown Music Hall in Tarrytown, New York, and rehearses there on Monday evenings, September through May.

For additional concert and ticket information, advertising, donations, and updates, visit us at: www.westchestersymphonicwinds.org.

Curt Ebersole has served as the Conductor/Music Director (John P. Paynter Memorial Chair) of the Westchester Symphonic Winds since 2008, fostering its exponential growth over the past fifteen years, culminating in The American Prize for 2018-2019. He retired from Northern Valley Regional High School (Old Tappan, New Jersey) in 2013 after serving as Director of Instrumental Music for 31 years, and now teaches at The Masters School, in Dobbs Ferry, New York. He earned a Bachelor of Music Education degree and a Master of Music in Conducting degree from Northwestern University, where he studied conducting with John P. Paynter and clarinet with Larry Combs, and earned a Master of Fine Arts degree in Clarinet Performance from SUNY-Purchase, studying with Ben Armato. He has served as guest conductor/clinician for many county, regional, and all-state student ensembles, and adult community ensembles across the nation, including performances at Carnegie Hall, Avery Fisher Hall, and Symphony Space, and in Las Vegas, South Korea and Australia. His achievements include multiple teaching awards, ensemble performances as a clarinetist and basset hornist, and speaking/clinic engagements with the Midwest Clinic, TEDxOneonta, and numerous state music education conventions and conducting symposia.