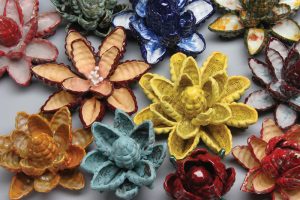 InCiteful Clay, an exhibition that explores a movement in contemporary ceramics that addressed social commentaries, completed its U.S. tour this past month. In the exhibition, 27 artists used the age-old medium of clay, which traditionally serves functional or decorative purposes, to offer provocative critiques of social and political injustices. The works are arranged within five themes – war and politics; social and human condition; gender issues; environmental concerns; and popular and material cultural – and responded to specific issues such as consumerism, global warming and capital punishment in styles that can be viewed as aggressive, disturbing and irreverent.

The show was curated by Judith Schwartz, Ph.D., whose research resulted in a book titled Confrontational Ceramics, which also became the focus of an exhibition at ArtsWestchester by the same title in 2008. Noting the significance of the works, both as an exhibition and as a statement of the medium and its uses and potential, the show toured to ten museums for a period of three years. InCiteful Clay implies that the works “incite” emotion by provoking and informing the audience; but also that the artists offer “insight” and reflection to the issues addressed through their works.

According to Schwartz: “Teachers remarked that they could use the visual works for curriculum development… I was elated that so many people were inspired and moved to new conversations that went beyond the work.”

A version of this article first appeared in the November 2016 issue of ArtsNews, ArtsWestchester’s monthly publication. ArtsNews is distributed throughout Westchester County. A digital copy is also available at artsw.org/artsnews.