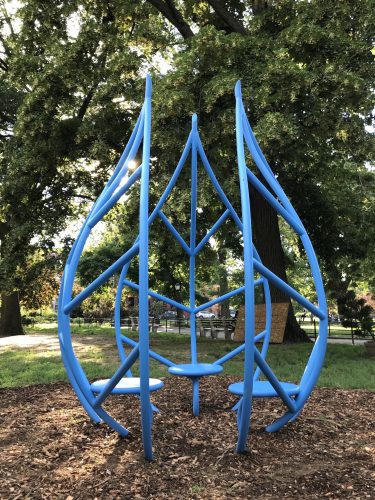 “The Conversation Sculpture” by Musa Hixson

“My goal is to create artwork that is not just in the space, but of the space,” says Brooklyn artist Musa Hixson.

His new public artwork, “The Conversation Sculpture” – a steel structure that resembles a nearly blooming flower – was recently installed in Wolfs Lane Park in Pelham. The structure encompasses three oversized seats that are meant to promote dialog and contemplation.

The temporary installation, on view through June 20, 2023, is part of Pelham Art Center (PAC)’s public art program. The Center’s Communications Manager, Michelle Costanza, says that PAC hosts three to six solo and group public art exhibitions each year: “In 2017, this program expanded [from our courtyard] to Wolf’s Lane Park as an extension of the our mission to provide free access to artwork for all.”

Hixson explains that he has done plenty of work in community parks and public places. This artwork was inspired by his observations on how people use these spaces – they relax, sit, exercise, walk their dogs, play and meet up for a chat.

The artist began the sculpture pre-pandemic. He explains: “Since then, there have been a lot of thoughts on how people interact in [shared] spaces. But at this point…people are looking to interact with each other again.” By having the enclosed seats face each other, the sculpture becomes what Hixson calls a “pod” for something as simple as having a conversation or lunch.

Of course, measuring nine feet tall and six feet wide, this is not just “any other park bench.” It is visible throughout the park, and to passersby on the street. “I’m hoping that as people go by, they stop and say ‘what’s that?’ and that it adds to the color of their day.”

Speaking of color, Hixson reflects on his choice of the sculpture’s monochromatic blue: “Most parks are green or brown, so the concept was to have something in contrast with the colors of the park, but at the same time match with the sky.”

Lately, says Hixson, people seem more interested in public space. “People are getting together outdoors more, and I don’t think that’s going away.”