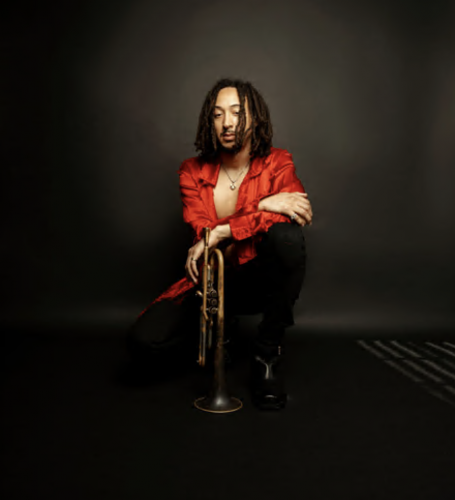 When Theo Croker began taking trumpet lessons at age 11, his mother would videotape him and send the recordings to his grandfather. After watching the tapes, his grandfather would give his mother directions for Croker’s teacher on how to instruct his grandson.

“My grandfather walks behind me, with all my other ancestors,” he says.

On September 11, the Theo Croker Quartet will play two sets at the Play Group Theater. It’s part of JazzFest White Plains, a four-day jazz celebration taking place from Sept. 9-12 at venues throughout the downtown area.

“Music was something that totally captivated me as a child,” says Croker, whose 2019 album Star People Nation was nominated for “Best Contemporary Instrumental Album” at the 62nd Grammy Awards. “I would play for hours, all the time.”

After graduating from Oberlin College Conservatory in Ohio, Croker accepted a gig in Shanghai, China, where he played three shows a night, six days a week. Croker found the experience remarkable—so remarkable, in fact, that coming home was a bit of a downer. “I was so used to playing all the time,” he says. So back to Shanghai he went, where he began freelancing, managing a venue and booking bands. He also worked as the house band for a late-night show called Asia Uncut, serving as music director, bandleader and composer. All told, he spent seven years in the city.

When Grammy and Tony Award winner Dee Dee Bridgewater came to Shanghai to perform, she and Croker struck up a friendship. Bridgewater had some advice for the young trumpeter. “Dee Dee decided I had to come back to the States and get on a major label,” Croker says. “When Dee Dee tells you something, you listen.”

In 2011, while still in China, Croker recorded an album with Bridgewater as producer and occasional vocalist. Their collaboration, Afro Physicist, was released three years later on Bridgewater’s DDB label on OKeh Records, a division of Sony Masterworks. Other Croker albums on DDB followed, including DARKFUNK and Escape Velocity.

“To me, it’s just music,” he says. “Genres are just used to rank people, to say one type of music is better than another.”

This month, Croker’s latest album, Black to Life of Future Past, will be released. Croker is joined on several tracks by Wyclef Jean, Ari Lennox, Kassa Overall and Gary Bartz.

“It’s a unique type of album,” Croker says. “It uses the vocabulary and language that the black masters created, with a high vibration. It’s healing music. I hope everybody enjoys it.”

You May Also Enjoy: Jazz Under the Stars: a Benefit Concert for the Arts