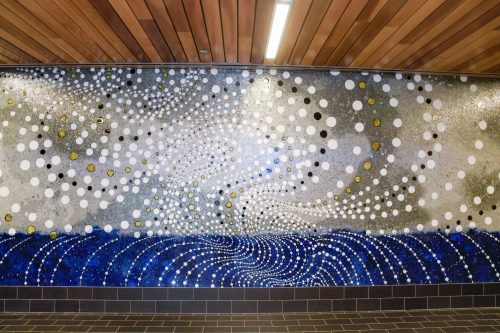 Barbara Takenaga is known for swirling, abstract paintings in stunningly detailed compositions. She paints her kaleidoscopic, geometric compositions of dots and lines completely freehand in a practice that is both meticulous and meditative.

Says Bloodworth of the new works: “[They] energiz[e] us as we travel with her infinite lines, which seem to propel us along our journey.”

Takenaga’s repetition of forms suggests the inherent, yet sometimes incomprehensible, logic of both the cosmic and the cellular, while spontaneous twists and puckers preserve the elements of wonder and surprise.

Forte (Quarropas) and Blue Rails (White Plains), which are made, respectively, of mosaic and laminated glass, feature signature stylized abstract forms. The pieces’ deep vibrant blue undulating movements reference rail travel, the history of the city and its exuberant energy. Both works, with their deep blue and vibrant hues, have the potential to transport the commuter’s routine into an unexpected cosmic journey.

These works continue a streak of large-scale works made by the artist in recent years. In 2015, Takenaga created a piece of an unprecedented scale – a 100’ wall at MASS MoCA. The mural features an image from her Nebraska Paintings series, a body of work that moves closer to the representational imagery only implied in earlier pieces, but which captures the wide open spaces and big sky of the artist’s native state. As viewers walk the length of the wall, the chain of images functions like a series of film stills, implying movement and the rhythm of time.

Just as her MASS MoCA work reflects the movements of its passersby, the deep sea of blue, and splashes of iridescent green, pink and aqua that are present in Forte (Quarropas), sparkle and come alive following the footsteps of the commuters passing by the lobby wall on which it is located. 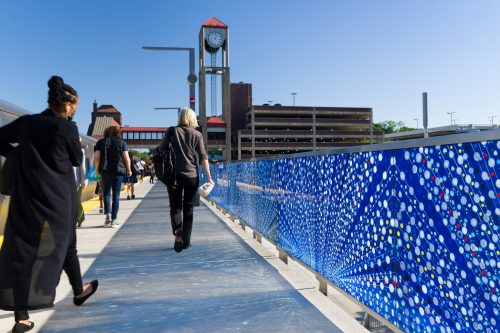 Blue Rails (White Plains), the artwork created in laminated glass, is located on the side platform overlooking the station’s parking lot and Hamilton Avenue, a main artery that connects the city’s downtown. The long horizontal image is composed of a series of mirrored abstract patterns in a forward and backward movement in space.