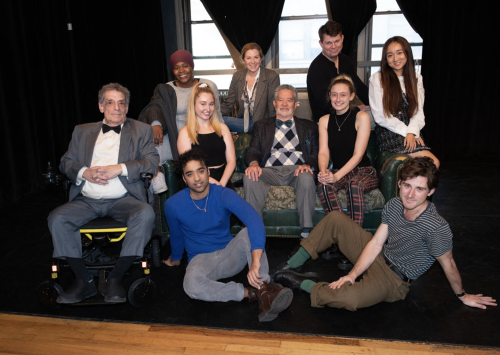 The cast, and members of the production staff, of “Never the Sinner” (photo by Donna Svennevik for Axial Theatre)

Never the Sinner, a play by John Logan, recounts the real-life trial of two infamous, wealthy college students, known only by their last names Leopold and Loeb, who kidnapped and murdered Loeb’s 14-year-old cousin in May 1924. This was the first play written by Logan, who went on to write other plays, as well as screenplays and collaborate on the 2013 James Bond film Skyfall.

From November 10-20, Axial Theatre will present this play at Bethany Arts Community in Ossining. It will star Trent Dawson, the founding artistic director of Katonah Classic Stage, as the prosecutor, and Albi Gorn, co-founder of Westchester-based GoJo Clan Productions, as the defense attorney.

The Pleasantville-based Axial Theatre, a nonprofit founded by director Howard Meyer in 1998, is an ensemble of actors, writers and directors committed to supporting independent theater through workshops for playwrights, informal play readings, fully staged productions and acting classes for all levels.

“We chose ‘Never the Sinner’ because we’re very interested in social issues. These are two boys who want to prove that they are superior to other people by committing the perfect crime,” says Artistic Director Cady McClain, who joined the group in January and is directing the production. “But they don’t get away with it.” McClain hopes to screen taped recordings of the play at local prisons.

There’s new energy at Axial Theatre since the arrival of McClain, a three-time Daytime Emmy Award winner, two-time-nominated director, stage and movie actor, author, singer and artist. She has brought on four new board members, including playwright, screenwriter and director John Patrick Shanley, as well as four ensemble members. She also created monthly readings of the short new plays of both local and national playwrights.

Axial Theatre will host an online event called Cactus Flowers on December 18, part of a reading series for short-works-in-progress that pairs professional actors and Axial ensemble members with special guest moderators who guide the conversations around these nascent works.

McClain is also directing the company’s Robust Admixture, a short film inspired by Westchester Poet Laureate B.K. Fischer’s novella of poems titled Ceive. She expects the film to be finished by the end of the year.

The Los Angeles-based McClain, who travels to New York once a month, expressed her interest in joining Axial Theatre last year. “Howard [Meyer] and I are old friends who studied together at Michael Howard Studios in New York,” says McClain. “When the position became available, I said, ‘You have an opening. I’m curious about it.’”

McClain is the only actor to have won three Daytime Emmys for three different shows: All My Children, As the World Turns, and Days of Our Lives. “Daytime television has a lot of similarities to theatre,” says McClain, noting that many stage actors appear in these serial dramas. “We call it ‘a play a day.’”

McClain developed a devoted following for her portrayal of Dixie Cooney on All My Children. In January 2007, when the writers knocked Dixie off, audiences protested. She reprised her role on the show multiple times and was negotiating a two-year contract when the show was canceled in 2011.

McClain expresses similar devotion to her position as Artistic Director. “Westchester has an enormous amount of people who care about the arts,” she says. “It’s an amazing community and I want to bring my best to them.”