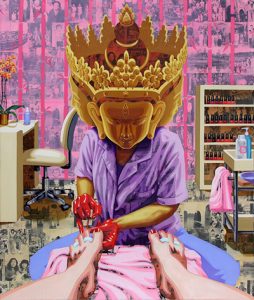 Pelham Art Center has announced Massachusetts resident Sammy Chong as the winner of its 2017 Alexander Rutsch Award and Solo Exhibition. The mixed-media and printed-canvas artist is the ninth winner of this juried award. Chong’s The Twelve asks its viewers to question their preconceived notions of the social, economic, political and cultural identities of immigrants. The twelve exhibited works each present a figure who is taking the role of a job that is traditionally held by an immigrant; however, the identity of the figure is visually represented by mythological and spiritual icons from the figure’s perceived culture. Ganesha, the elephant god of India, is a cashier at a convenience store while a man in an African mask drives a New York City cab. Viewing these sacred narratives as they take human form urges the observer to reconsider common cultural biases of the people who occupy these jobs, and to instead celebrate cultural diversity.

The Rutsch Award was created to honor the memory and artistic achievement of Alexander Rutsch, an artist who actively supported the Center for more than 25 years. Its winner receives a cash prize and the only solo exhibition at the Center each year. Chong, a Fine Arts professor at Boston College, was chosen from approximately 400 applicants.

The Twelve, a title that refers to both the number of works in the exhibition and a symbolic number in most religions, is on view through June 17. In conjunction with the exhibition, a collection of Alexander Rutsch’s paintings will be on view in the Center’s front gallery. For more info, visit: pelhamartcenter.org.

Image above: File and Fill by Sammy Chong

A version of this article first appeared in the May 2017 issue of ArtsNews, ArtsWestchester’s monthly publication. ArtsNews is distributed throughout Westchester County. A digital copy is also available at artsw.org/artsnews.