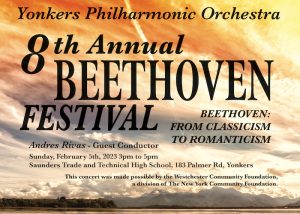 The program features Beethoven’s magnificent third symphony “Eroica”, a revolutionary work in its time, written at a major turning point in Beethoven’s life and career. Into this music, Beethoven poured his passion, fury and anguish as he dealt with his developing deafness, with a depth of musical expression that moves away from his roots in the classical and baroque styles and into the Romantic era.

Beethoven’s Romance no. 2 in F major for violin and orchestra is admired for its lyricism and poetic qualities, expressed through beautiful melodies in cantabile (singing) style, decorated with virtuosity in baroque turns, trills, and grace notes. YPO concertmaster, Urara Mogi is highlighted as violin soloist.

Mendelssohn’s Hebrides Overture “Fingal’s Cave” was inspired by the magic of Fingal’s Cave on the uninhabited island of Staffa in the North Sea, which the composer visited at the age of 20 on his first visit to Scotland. In the true Romantic sense, Mendelssohn’s inspiration became the source of his music. The cave is named after a Scottish hero in an epic poem by 18th century Scotspoet-historian James Macpherson.

Cherubini’s Concert-Overture is an exhilarating curtain-raiser, encompassing all the drama and character of his music for opera. Beethoven regarded Cherubini as the greatest of his contemporaries, particularly in the operatic genre and this work offers an exciting opening for our program.

The concert is free and all are welcome to join us for this exciting afternoon of music.