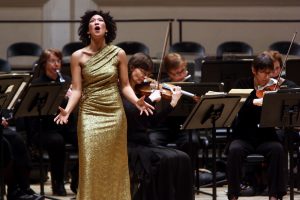 Along with masterworks of Beethoven, Bach, Brahms, and Mozart, the orchestra will perform 20th century milestones of Gershwin, Bernstein and Stravinsky, and a 21st century masterpiece of the future by David Ludwig opens the season on October 23. The New York area premiere is commissioned by the Westchester Philharmonic alongside six other reginal orchestras on the occasion of the composer’s marriage to violinist Bella Hristova, who returns to the Phil to perform the work led by Jaime Laredo.

Audiences should buy early for the Phil’s popular December 18 Winter Pops concert featuring Broadway favorites and classical hits with headliner star Ashley Brown (Mary Poppins) who returns this season by popular demand. A highlight of the season is the Philharmonic’s annual February 12 Friends & Family Concert featuring a pre-concert Instrument Petting Zoo for young listeners (who also come free with a paying adult) followed by a guided-tour concert led by conductor Ted Sperling and featuring rising star singer Julia Bullock. Spring events include a musical celebration of the 40th anniversary of the Kalichstein-Laredo-Robinson Trio and a June 18 season finale led by Westchester-born Andrew Litton, newly named conductor of the NYC Ballet orchestra, and featuring the jaw-dropping technique of pianist Conrad Tao.

Pre-concert discussions with the artists before most main stage events as well as free open rehearsals perfect for young families offer a glimpse into the music-making process. Audiences can even keep the fun going at the Phil’s popular post-concert events: the subscriber-only Kick-Off Party on October 23rd featuring delectable desserts and music; the Winter Pops After-Party on December 18 where guests mingle with the stars while enjoying scrumptious hors d’oeuvres and a wine tasting with Aries Wines & Spirits; and Father’s Day celebrants on June 18 will enjoy a post-concert barbeque for the whole family including live bluegrass music.

Soon after her unforgettable Tchaikovsky with the Phil in 2014, Bella Hristova and composer David Ludwig were married (with Jaime Laredo presiding!), so the Philharmonic commissioned Mr. Ludwig to write a concerto for his new bride. David Ludwig’s prior commissions include Carnegie Hall, Philadelphia Orchestra, eighth blackbird, Ravinia, and many more. Book-ending this “romantic” new work are two Romantic period giants, Weber (Oberon Overture) and Brahms, whose fourth and final symphony is regarded as his crowning achievement.

By overwhelmingly popular demand, vocalist Ashley Brown returns to deliver awe-inspiring renditions of What a Wonderful World, Ave Maria, Hello, Young Lovers, and much more. The one-named pianist Ji, whose appearance in the “Android” TV commercial seen during the Grammys instantly went viral and made him a breakout sensation, will dazzle in an audience-favorite selection of Rachmaninoff. This program of popular and classical hits also includes Bernstein’s Candide Overture and the Waltz from Tchaikovsky’s Serenade.

The Philharmonic warmly invites music-lovers of all ages to hop aboard conductor Sperling’s guided tour to a family-friendly program, perfect for all ages yet fully satisfying to the most sophisticated musical palates. The annual “Friends & Family” concert features Julia Bullock who has been described in the press as “ravishingly visceral,” “the evening’s most remarkable showstopper,” and for her “…clarity of delivery…beauty of sound…opulent and glorious.” Stravinsky’s monumental Firebird marked a musical revolution that announced not only the young composer’s genius but a completely new musical paradigm at the beginning of the 20th century. The program also includes works of Mozart, Josephine Baker, Bernstein and Gershwin plus Glinka’s Russlan & Ludmilla Overture.

The “KLR” Trio is arguably the finest ever of its kind, and to honor their incredible 40-year collaboration we present the ultimate compositional achievement for trio and orchestra, Beethoven’s Triple Concerto. Bach’s glorious Brandenburg No. 5 and Mozart’s gorgeous chamber work will feature members of the Phil in solo roles.

Westchester-born Andrew Litton is the recently named Music Director of the New York City Ballet. He teams with pianist Conrad Tao, whose jaw-dropping technique and sensitive phrasing belie his youth and inspire ovations world-wide, in one of the most famous concertos ever written, Tchaikovsky’s Piano Concerto No. 1. When Dvořák came to America in 1892, he was transfixed by the music of Native Americans and African-American spirituals, incorporating these influences in his Ninth Symphony (“From the New World”), which is now among the most famous of all symphonies. Also on the program is Weber’s Overture to Euryanthe.

All performances will take place in The Concert Hall at The Performing Arts Center, Purchase College, 735 Anderson Hill Road, Purchase, New York. A pre-concert discussion with the artists takes place inside the concert hall at 2 pm before each performance (excluding December 18).

Single tickets range from $97-$40. Four and 5-concert subscriptions range from $105-$406. Concert-goers 25 years of age or under pay half-price for single concert tickets. Group discounts are also available. Winter Pops After-Party tickets are $30 each. The post-concert June BBQ event is $25 for adults and $12 for children. To purchase, call the Westchester Philharmonic at (914) 682-3707 ext. 10 or visit westchesterphil.org. Visa, MasterCard, American Express, Discover Card accepted.

Free open rehearsals with the orchestra are scheduled for October 23, February 12, April 9 and June 18 at 11 am in The Concert Hall. Children and families welcome. Coffee and donuts will be served backstage for “Phil Families”. Please visit westchesterphil.org for information before attending.