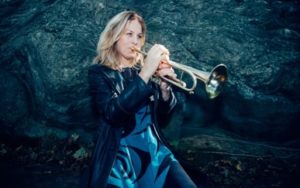 Ossining, NY – During the month of March, Westchester Collaborative Theater (WCT) will continue its Jazz in the Box Series in its black box space with three jazz-focused concerts.

On March 7, the talented jazz trumpeter Ingrid Jensen will return to WCT to play two sets (7:30 pm and 9 pm) with the Ingrid Jensen Four. She has been hailed as one of the most gifted trumpeter of her generation. As a sought-out teacher, collaborator, and soloist, it is easy to see why the New York Times calls her “as versatile as she is vigorous.” After a teaching stint in Europe in her early twenties – as the youngest professor in the history of the Bruckner Conservatory in Linz, Austria – Ingrid settled in New York City in the mid-1990s where she joined the innovative jazz orchestras of Maria Schneider (1994-2012) and Darcy James Argue. More recently, Ingrid has been performing with the Grammy-winning Terri-Lyne Carrington and her Mosaic Project. Ingrid is a featured soloist on the Christine Jensen Jazz Orchestra’s Juno-award-winning album, Treelines (2011), and its successor, Habitat (2013). She has performed with a multi-generational cast of jazz legends ranging from Clark Terry to Esperanza Spalding; Ingrid has also performed alongside British R&B artist Corrine Bailey Rae on Saturday Night Live, and recorded with Canadian pop icon Sarah McLachlan. In addition to her busy sideman and featured soloist schedule, Jensen leads her own quintet, quartet and organ trio. Her own bands have garnered glowing reviews and a loyal fan base in Australia, South Africa, almost every country in Europe, across Canada, the US, South America (including Brazil, Peru and Chile), Japan and Mexico.

Tickets, $25 per set, can be purchased online at: https://www.brownpapertickets.com/event/4520376 (limited seating available; advance purchase is strongly recommended.) Refreshments will be available.

On the weekend of March 20 and 21, there will be a Jazz in the Box Weekend with special pricing if attending both shows.  The first show, Sundad, is on Friday, March 20, and the second show, the Gerry Malkin Quintet, is on Saturday, March 21.  Both shows will have sets at 7:30 pm and 9 pm.

Tickets will be $20 per set for each show.  If attending both shows, the discounted price for both will be $30.  Tickets for Sundad are available at:  https://www.brownpapertickets.com/event/4520773

Tickets for the Gerry Malkin Quintet are available at:  https://www.brownpapertickets.com/event/4520775

Limited seating is available so advance purchase for both shows is strongly recommended.  Refreshments will be available.

Sundad, comprised of father and son guitarists, John Eurell Sr. and John Eurell Jr., is making a return engagement to WCT.  They are making their name as an acoustic band whose compositions, recordings, and live performances are filled with beautiful rhythms, harmonies, and chord changes. The original repertoire consists mainly of finger-style acoustic guitar instrumentals that have been described as “World Fusion, New Age” and Jam-Band music.

The Gerry Malkin Quintet is comprised of some of the finest jazz musicians in the area. WCT is delighted to welcome them back to its black box theater in 2020.  Leader and tenor saxophonist Gerry Malkin has performed with Tito Puente, Lew Soloff, Adam Nussbaum,George Colligan, the Temptations, the Four Tops, Ray Vega, Joey Calderazzo and Dave Weckle.  Trumpeter Alex Norris has performed with the Vanguard Orchestra, Joshua Redmond, Brad Mehldau, and Chris Potter, among others. Guitarist Chris Morrison has performed with Adam Nussbaum, John Patitucci, Joey Calderazzo, and Brian Torff, among others. Bassist Mike McGuirk has played with John Abercrombie, Tim Hagan, and Mulgrew Miller, among others. Drummer Bobby Leonard has played with the Woody Herman Orchestra, Dave Liebman and Eddie Henderson, among others.

The Westchester Collaborative Theater is a multicultural, cooperative theater company located in Ossining, NY, dedicated to developing new work for the stage and bringing live theater to the community. It is comprised of local playwrights, actors, and directors who employ a Lab approach in which new stage works are nurtured through an iterative process of readings, critiques, and rewrites. When work is ready for production, it is produced for the public at various local venues.

WCT is committed to furthering theater arts in our community. It is a 501(c)(3) non-profit corporation and a recipient of production grants from ArtsWestchester and New York State Council on the Arts.

Previous post:
« "Of Aliens and Avocados": Festival of One-Act Readings