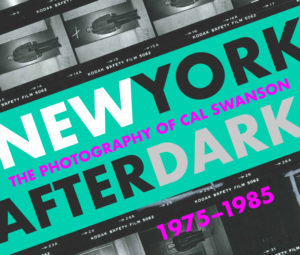 OSilas Gallery at Concordia College New York opened its new exhibition, New York After Dark (1975-1985):  The Photography of Cal Swanson, last week.  Curated by Lauren Rosenblum, this exhibition includes over 50 dramatic black and white portraits of the denizens of New York City circa 1975-1985.  The exhibition is free and open to the public and will be on view through March 5.

At the time the photos featured in New York After Dark were taken, Cal Swanson was a young man following his passion for photography.  In the evenings he would take the train from Eastchester to Grand Central Station and wander the streets of Midtown.  Approaching strangers with faces he found interesting, Swanson used his unique vision to tell whole stories through the expressions of his subjects. These stunning black and white photos perfectly capture the diversity and spirit of New York during this gritty time in the city’s history.

Mr. Swanson, a resident of Rye, developed over 300 photographs from this ten-year period (he has over 1,000 negatives).  Surprisingly, he has kept the photographs in storage boxes in his closet for over 30 years.  New York After Dark is his first major solo show and the first time that most of the photographs featured in the exhibition have been on public view.  OSilas Gallery is pleased to note that Mr. Swanson is an alumnus of Concordia Junior College (Class of 1971), the all men’s two-year college that became Concordia College New York.

New York After Dark was curated by Lauren Rosenblum, a Scarsdale native, who is currently pursuing her Ph.D. in Art History at The Graduate Center, City University of New York.  She has held curatorial positions at the Museum of Fine Arts, Houston and the Philadelphia Museum of Art, among other institutions.

The exhibition is free and open to the public, however groups of eight or more are requested to make advance reservations to view the show with Executive Director Elizabeth Vranka at [email protected]. Gallery hours are Tuesday/Wednesday/Friday 12 pm – 5 pm, Thursday 12 pm – 7 pm, Saturday 2 pm – 5 pm and by appointment by contacting the Executive Director.

OSilas Gallery is located on the campus of Concordia College, 171 White Plains Road, Bronxville, in the Donald A. Krenz Academic Center on the second level of Scheele Memorial Library.  Free parking is available on campus and is accessible via entry on Concordia Place off of White Plains Road. For more information on exhibitions and a full listing of gallery events, please see osilasgallery.org.

OSilas Gallery integrates the visual arts into the cultural and educational life of the Concordia College campus and surrounding community by providing quality exhibitions and programs that are diverse in style, content and media; memorable, thought-provoking and spiritually enriching; and of artistic originality, integrity and excellence.

About OSilas Gallery at Concordia College