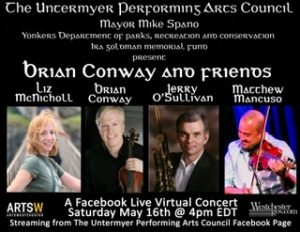 Saturday, May 16th at 4:00 pm on its Facebook Pages
The Untermyer Performing Arts Council is pleased to announce a wonderful experiment!
Our annual Irish concert, one that had to be rescheduled several times because of the epidemic, will be held online on Saturday, May 16 at 4 PM on the Untermyer Performing Arts Council‘s Facebook pages!
This performance will more than exceed expectations, with the musical geniuses of Liz McNicholl, Matt Mancuso and Jerry O’Sullivan, led by master fiddler Brian Conway, all award-winning and highly regarded performers. Their remarkable talent will lift your spirits, make you want to tap your feet, clap your hands and dance! What better way to warm our hearts during the pandemic?
Brian Conway, Premier Irish-American fiddler, performs with the skill, grace and force that are steeped in tradition but distinctively his own. Conway has won numerous all Ireland fiddling competitions, and has been called one of the best fiddlers of his generation. Conway has  been named Irish Echo’s Top Trad Artist, the most prestigious award in the New York Irish music community.
Yonkers own Jerry O’Sullivan’s outstanding style of playing the uilleann pipes is the result of integrating the many influences of his training and performing with his own personality, taste, invention, and sense of wonder. His excellence on the uilleann pipes causes him to be recognized as one of America’s great uilleann pipers.
Acclaimed vocalist and Irish native Liz McNicholl has performed at numerous venues around the country, touring with the acclaimed group Cherish The Ladies, with her own band, and appearing on television several times.  She continues to perform as a soloist with her band, singing a variety of styles of music from Celtic to Americana to Folk.
Guitarist Matt Mancuso, a spirited, exuberant and exciting musician, was introduced to Irish music as a child by his dad, and studied with renowned musicians and teachers Maureen Glynn and Tony DiMarco. Not only has he competed in the All Ireland competitions many times, he performs around the world, touring with The Lord of the Dance, Grada and the Kathy Ryan Band.
Our amazing performers are playing outdoors to ensure they are socially distancing, so visit our social media or call our Arts line at 914-375-3435 if the weather looks bad to check the status of the concert.
The concert is being performed on in memory of American Irish activist Ira Goldman, who not only served as president of the American Irish Musicians Society and two Comhaltus Ceolteori branches, he also was a former board member of the Untermyer Performing Arts Council.
This program, free and open to the public, is made possible by ArtsWestchester with support from the Westchester County Government and the City of Yonkers.
For further information, please call the Unyermyer Performing Arts Council at 914-375-3435.
###