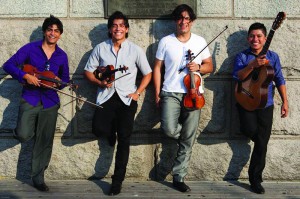 “ArtsFest” returns to New Rochelle and Pelham on Saturday, September 27th and Sunday, September 28th, with a full menu of art events and activities. Capping the two-day, two-city celebration will be a free concert at Library Green on Sunday September 28th at 3 pm featuring the Villalobos Brothers, a trio of virtuoso violinists, singer-songwriters, composers , arrangers, and multi-talented instrumentalists who have performed at venues as varied as the Latin Grammy ® Awards, Carnegie Hall, the Rainbow Room at Rockefeller Center and the New York Mets field at Shea Stadium. Known as one of the leading ensembles of world music, they have accompanied and collaborated with many artists, including Paloma San Basilio, Paddy Moloney and The Chieftans, and Dolly Parton.

Organized by the New Rochelle Council on the Arts, ArtsFest highlights the variety of arts and arts venues in New Rochelle and Pelham, with art exhibits, programs and family-friendly activities that give both visitors and residents alike a window into the city’s rich cultural and artistic diversity. The celebration will include live music, great food, exciting live performances, and eclectic shopping. For a complete calendar of venues and events visit www.newrochellearts.org.

About The Villalobos Brothers

The Villalobos Brothers were considered child prodigies and had early soloist debuts with the Xalapa Symphony Orchestra playing the Sibelius, Brahms and Sain-Saens violin concertos. They also had solo appearances with the National Symphony Orchestra of Cuba and the National Symphony Orchestra of Peru. In 2000, the U.S. Department of State awarded the eldest brother, Ernesto Villalobos, a Fullbright Grant to carry out graduate studies at the Manhattan School of Music, where he studied with Patinka Kopec and Nils Vigeland. In 2001 he performed at Master Classes led by Pinchas Zukerman and Glenn Dicterow and travelled to Israel to study with Shlomo Mintz.. The middle brother, Alberto Villalobos, left Mexico in 2002 and studied violin with Igor Oistrakh at the Royal Conservatory of Brussels for three years. He was later selected as a student by Pierre Boulez at the Lucerne Festival Academy in Switzerland. In 2003 he performed at Master Classes led by Zakhar Bron. In 2003 the youngest brother, Luis Villalobos, moved to Germany, where he studied violin with Nicolas Chumachenco at the Hochschule für Musik Freiburg. He was also accepted at the prestigious Mozarteum University of Salzburg in Austria.

Although the three Villalobos Brothers are classically trained violin virtuosos, their music draws on many genres, including Son Jarocho (a musical style from their native Veracruz, Mexico, Jarocho describes the people and culture of the southern coastal plain of Veracruz, who for more than two centuries have shaped a distinctive regional music), Jazz, Rock and Blues. Most of their original music features complex patterns of interwoven three-violin harmonies, intricate call-and-response arrangements and lyrical melodies carried out by one of the brothers as the other two reinforce it in counterpoint.