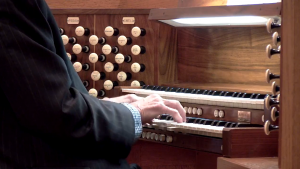 On Thursday evening September 10 at 7 PM, The Sanctuary Series will present a concert of Remembrance to honor those who suffered and died on September 11th, streamed live from the sanctuary of the South Salem Presbyterian Church (New York). The event which will be closed to the public will be webcast on the Series’ Facebook page: www.Facebook.com/thesanctuaryseries (@theSanctuarySeries).

Organized by the piano recital series’ artistic director Mary Jane Newman who is the director of music at the Church, the performance will feature a medley of popular hymns showcasing the American spirit, including “Variations on the Battle Hymn of the Republic,” arranged by her husband the internationally renowned keyboardist Anthony Newman and labeled “An ingenious and attractive piece“ -by the Chicago Sun Times.  He will perform the piece on the Church’s Russell & Co. pipe organ.

The concert will also include several works with Mrs. Newman, who is herself an acclaimed conductor, pianist and organist, performing on the piano with guests Vince Castellucci, on guitar and violin and Barbara Granata, on trumpet, both are accomplished musicians who can be heard often at the South Salem Church. Also featured will be baritone, Buddy Courtenay, a New Orleans native and veteran of many American opera venues. He and his wife Shalyn, perform as cantorial soloists at Temple Shaaray Tefila in Bedford, and regularly cross lines of faith to create meaningful life cycle events for individuals of all denominations.

The September 11th tribute is the fourth in a series of concerts hosted by the Church during the pandemic.  Mrs. Newman thanked Pastor Mark Salmon for his continued support and assistance. An ordained Rabbi and director of music at Shaaray Tefila, she is also a chaplain at Greenwich Hospital (CT). Mrs. Newman praised the church congregation for the support they have been showing for medical personnel and other essential workers by joining with members of the community to ring the steeple bells each evening at 7 PM.

Questions or comments may be directed to [email protected].