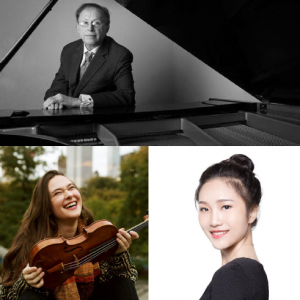 The Sanctuary Series dedicated to bringing extraordinary keyboard performances to local audiences in northern Westchester and neighboring parts of Fairfield counties begins its spring 2021, three-performance season with a virtual presentation entitled, “Unpacking the Goldbergs” with Anthony Newman on Sunday, March 7, 2021 at 4 PM. Join acclaimed keyboardist, Bach scholar and friend of the Series, virtually, for an intimate afternoon featuring a discussion of Johann Sebastian Bach’s iconic work, the Goldberg Variations with illustrative playthroughs by Mr. Newman on the piano.

The Series continues on Sunday, April 18 at 4 PM with a performance by violinist Ariel Horowitz entitled, “Dialogues and Dialectics.” Hailed by The Washington Post as “Sweetly Lyrical,” Ariel Horowitz cannot remember life before loving music. A student of Ani Kavafian at the Yale School of Music, Ariel previously studied with Itzhak Perlman and Catherine Cho at The Juilliard School. Prizewinner at the Menuhin, Grumiaux, Stulberg, and Klein International Competitions, she has received numerous other grants, awards and distinctions.

Her program tracks the evolution of the violin and piano, two kindred spirits, as they have evolved together throughout the history of Western Classical Music, traveling through time and space – despite pandemic travel restrictions – from Vienna to the Czech Republic to Belgium and back again. The concert will be performed in the sanctuary of the South Salem Presbyterian Church and streamed live for free on Facebook. You do not have to be on Facebook to watch. There will be limited live audience seating, details to be announced, subject to protocols in place for the date of the concert.

The season concludes with “Songs of Spring” featuring pianist Wynona Wang on Sunday, May 9, 2021 at 4pm. She will perform a virtual concert featuring Scarlatti, Rachmaninoff and Schumann. Born in Beijing, she is an active performer in China, Europe and the United States and has won numerous first place prizes including the 2018 Concert Artists Guild International Competition. This concert will also be performed in the sanctuary of the South Salem Presbyterian Church and streamed live for free on Facebook (you do not have to be on Facebook to watch). Again, there will be limited live audience participation subject to protocols in place for the date of the concert. Check the website www.thesanctuaryseries.org for updates on live seating and prices. Questions may be addressed to [email protected]