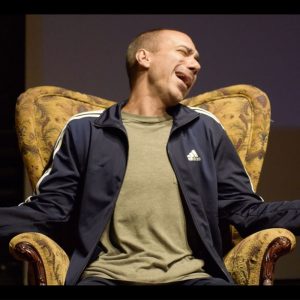 Rent Control, a one-man show written and performed by Evan Zes, is coming to The Rye Arts Center for one night only on Friday, April 13, 2018 at 8:00 PM.

Evan Zes portrays some 30 different characters in this wild-but TRUE one-man-play that recounts a period in his life as he struggled to survive, live, and pursue his acting career in New York City.

When Evan falls backwards into one of the few remaining rent-controlled apartments in NYC, he finds a way to make money and pursue his dream, turning the apartment into a lucrative Airbnb scheme – that is until his moneymaking scheme backfires threatening to ruin his life. This cautionary tale has had audiences howling with laughter and at the same time on the edge of their seats. Critics have called it “…cheerfully profane,” a “…surprise thriller” and “…dangerously hilarious”.

Evan has an extensive acting resume. He has appeared in Arthur Miller’s critically acclaimed Incident at Vichy at The Signature Theatre, and in Julie Taymor’s The King Stag at the Barbican in London. He will now add The Rye Arts Center to his countless credits.

Tickets are $30 General Admission or $25 for Members of The Rye Arts Center.

Space is limited for this thrilling, moving, and fun one-man hit!

Established in 1960, The Rye Arts Center is the largest multi-arts center in the region. It is a community-based not-for-profit dedicated to inspiring interest and maximum participation in the arts in and around Westchester. They offer classes and lessons, performances, exhibitions, and a range of outreach programs. It is located at 51 Milton Road in Rye, NY. For more information, visit www.ryeartscenter.org or call 914-967-0700.