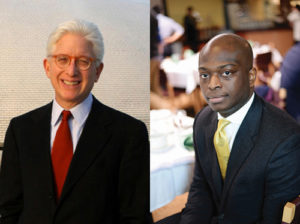 The Katonah Museum of Art Announces New Board Members

Katonah, NY, December 19, 2019 – The Katonah Museum of Art is pleased to announce the appointment of James S. Snyder to the Board of Trustees and Akili Tommasino to the Advisory Board. Both Snyder and Tommasino bring a high caliber of expertise, a passion for the arts and a community-centric approach to leadership. The Board of Trustees of the Katonah Museum of Art voted unanimously to confirm the appointment of Snyder and Tommasino, who will work with Michael Gitlitz, the Museum’s Executive Director, as well as their fellow members of the Board of Trustees and the Advisory Board.

James Snyder: James S. Snyder is an art historian and museum director. He is currently the Director Emeritus of the Israel Museum and Executive Chairman of the Jerusalem Foundation. During his twenty-year tenure as the Anne and Jerome Fisher Director of the Israel Museum, Snyder led the Museum through a dramatic period of growth and secured its stature as one of the world’s foremost museums. Over the course of his term, he strengthened the Museum’s regional and international presence with an ambitious series of collection and loan exhibitions in Jerusalem and traveling exhibitions worldwide, including North and South America, Europe, and Asia.

As Executive Chairman of the Jerusalem Foundation, Snyder will help lead the Foundation’s master-planning process – engaging with institutional, public, and private sector advisors and international leaders. He will also play a key role in generating philanthropic support for the Foundation’s capital and programming initiatives and operating needs.

Prior to his appointment at the Israel Museum, Snyder held a number of positions at The Museum of Modern Art (MoMA), highlighted by his role as Deputy Director from 1986 to 1996. During his tenure at MoMA, he oversaw the $60-million, 350,000-square-foot expansion of the Museum in 1984 and had significant organizational responsibility for major international loan exhibitions, including Pablo Picasso: A Retrospective (1980) and Henri Matisse: A Retrospective (1992). Born in Pittsburgh, Pennsylvania, Snyder is a graduate of Harvard University and a Loeb Fellow of Harvard’s Graduate School of Design and holds an Honorary Doctorate of Humane Letters from Hebrew Union College.

Akili Tommasino: Tommasino is a champion of art, culture and community and is committed to the KMA’s mission, as evidenced by his recent role at the Museum as juror and curator to announce the winning artists from the The Edge Effect: International Juried Exhibition during the 1st Look reception on June 29, 2019. Since October 2018, Tommasino has served as Associate Curator, Modern and Contemporary Art, at the Museum of Fine Arts Boston.

Prior to that, his professional experience took him to The Museum of Modern Art (MoMA) where, in his role as Curatorial Assistant, he worked on a range of collection-based initiatives and supported various programs, including Prep for Prep/Sotheby’s Summer Art Academy, which Tommasino founded with the support of Sotheby’s, to give New York City high school students of color an earlier window into the art world and to promote diversity in the field. He is completing a PhD in History of Art and Architecture through Harvard University, where he earned his MA and BA.

About the Katonah Museum of Art:

The Katonah Museum of Art promotes the understanding and enjoyment of the visual arts for diverse audiences. The Museum presents exhibitions that explore ideas about art, culture, and society – past and present – through innovative exhibition and education programs.