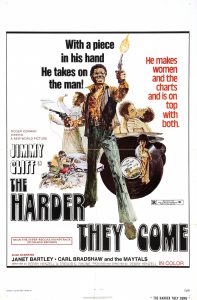 LISTEN TO THE MOVIE presents “The Harder They Come”

Film Screening and a Talk

A great movie soundtrack can make all the difference. In this series, Rob Cavenagh guides you through the music that makes movies memorable. Rob, a Bedford resident since 2000, is a lifelong music fan, record collector, musician and self-described soundtrack nerd. An ad agency guy by profession, he spent his college years working in a record store and then making music videos for Atlantic Records in the 1990s.

“The Harder They Come” celebrates Jamaican music and style, but it also considers issues of race. A celebration of Jamaican music and style, this was the first extensive American movie exposure for reggae, the insinuating Jamaican music that was just then beginning to make itself heard. The story centers around anti-hero Ivanhoe Martin (Jimmy Cliff), first shafted by the music industry before winding up as a ganja delivery boy who asks too many questions, landing him in hot water with the local corrupt police chief. Ivanhoe arrives in Kingston, Jamaica, looking for work and, after some initial struggles, lands a recording contract as a reggae singer. He records his first song, “The Harder They Come,” but after a bitter dispute with a manipulative producer named Hilton, soon finds himself resorting to petty crime in order to pay the bills. He deals marijuana, kills some abusive cops and yet, earns local folk hero status. Meanwhile, his record, rollicking reggae, is topping the charts.

Previous post:
« My Fair Lady - The film, the Restoration, the Talk
Next post:
Bedford Playhouse Announces 75th Anniversary Events for May and June, 2022 »