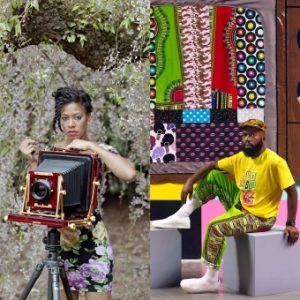 The Gordon Parks Foundation announced today that it will mount American Family – a special exhibition featuring the works of photographer Deana Lawson (Rochester, NY) and multidisciplinary artist Derrick Adams (Baltimore, MD) who were both selected as 2018 Gordon Parks Foundation Fellows earlier this year. In celebration of the exhibition, the Foundation will host an artists’ reception on Friday, October 19 from 6:00 – 8:00 PM that is free and open to the public. Both artists will attend and Lawson will also sign copies of her highly anticipated new book Deana Lawson: An Aperture Monograph, set to be published on Tuesday, September 25.

In American Family, the artists – who both draw inspiration from Parks – explore the complexity of the American character through familiar subjects with their own distinctive artistic approaches. On view concurrently with American Family will be a selection of Gordon Parks’ family portraits made during the 1950s in U.S. cities including Columbus, Ohio; St. Louis, Missouri; and Chicago, Illinois. Lawson notes, “Like Parks, my motivation is to give meaningful texture and complexity to images of global black culture.” Adams adds, “Parks’ influence…goes beyond the visual, into the meaning and purpose of why I feel it’s so important to show the many facets of black American life in ways that shed light onto the complexity and richness of our past, present and future.”

Lawson states that she envisions her photographic portraits of black persons as an “extended family” and an expression of “loving blackness,” in which black life is reclaimed by the visionary artist from negative forces and perceptions. In a recent interview appearing in the artist’s widely anticipated Aperture monograph Deana Lawson, she says, “I think about the capacity for human engagement, particularly in images and in pictures. I’m trying to conjure or direct the subject, in a way, to give me their full potential.”

Adams, an artist who consistently works across disciplines, roots his practice in deconstructivist philosophies such as the fragmentation and manipulation of structure and surface, and the marriage of complex and improbable forms. His work examines the force of popular culture and the media on the perception and structure of the self-image. “It’s natural for me to use my family as my subject,” Adams says, “to create a framework for the work I do.”

“Deana and Derrick are two wonderful contemporary artists that are creating narratives about the American scene in much the same way that Gordon Parks did throughout his life,” said Peter W. Kunhardt, Jr., Executive Director of The Gordon Parks Foundation. “They each take such bold approaches to exploring connections between people, and we’re very excited to share their work as part of our fellowship program.”

Now in its second year, The Gordon Parks Foundation Fellowship Program supports artists working across a range of artistic disciplines—in the visual arts and beyond—by providing short-term grants, and an exhibition at the Foundation’s exhibition space in Pleasantville, New York. Fellowships are awarded to artists working within themes of social justice and representation.