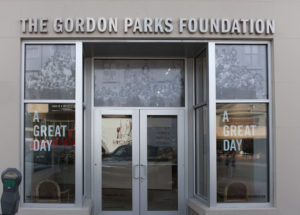 FOR IMMEDIATE RELEASE – February 1, 2019 – Pleasantville, New York – The Gordon Parks Foundation has mounted A Great Day – an exhibition celebrating the twentieth anniversary of Gordon Parks’ photograph A Great Day in Hip-Hop, Harlem, New York, 1998. The multimedia group exhibition features photographs by Art Kane, Gordon Parks, and Jonathan Rheingold; a documentary short video by Nelson George; and archival materials related to the photograph. It is free and open to the public from February 1 through March 29, 2019.
A Great Day explores the making of Parks’ famous photograph of 177 hip-hop artists, producers, and influencers that was published on the cover of the December 1998 issue of XXL magazine. Forty years before, Art Kane (1925–1995) photographed 57 jazz musicians spilling off a brownstone stoop at 17 East 126th Street in Harlem for an Esquire magazine issue about the evolution of the genre. As his photograph—commonly referred to as “A Great Day in Harlem”—ingrained itself in our collective memory, countless “Great Day” homages were created to record other historic gatherings.
Gordon Parks (1912–2006) visited this theme four decades after Kane. In 1995, Life magazine assembled ten of the twelve surviving musicians from Kane’s picture, and Parks photographed them standing where they had stood in 1958. Three years after the Life photo, XXL magazine tapped Parks to return to 126th Street to photograph the hip-hop artists who overflowed the stoop of number 17 to the two stoops on either side. The youthful bodies of a new genre’s golden age overtook the dilapidated brownstone, reclaiming the space for the next generation. A selection of Gordon Parks’ photographs of Harlem made throughout his career will be on view in the foundation’s offices concurrently with A Great Day. The 20th anniversary of A Great Day in Hip-Hop will be celebrated at the June 4, 2019 Gordon Parks Foundation Awards Dinner and Auction at Cipriani 42nd Street in New York; Questlove will give remarks. For more information about The Gordon Parks Foundation and the awards dinner, please visit gordonparksfoundation.org and follow on Facebook and Instagram. For media requests contact Amanda Smith at [email protected]