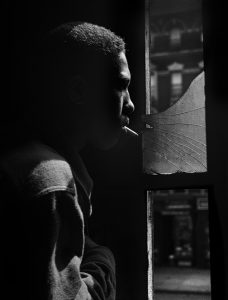 Exhibition to Open on August 6, and Remain on Display through October 12

July 31, 2018 – Pleasantville, New York – The Gordon Parks Foundation today announced exhibition dates for Harlem Gang Leader, a new exhibition of photographs by Gordon Parks. The exhibition, which explores Parks’ immersive investigation of Harlem’s gang culture in the late 1940s for Life magazine, will be on view at the foundation’s exhibition space from August 6 through October 12. The exhibition is free and open to the public.

Harlem Gang Leader examines Parks’ earliest picture story as the first African American photographer at Life, the most important picture magazine in the world at the time. Over a six-week period Parks befriended the teenage gang leader Leonard “Red” Jackson and documented every facet of his life, including diplomatic sessions with other gangs, fights, his community, his quiet moments at home, and other typical activities of a teenager. Parks carefully crafted an in-depth portrait of Jackson as a complex and conflicted teenager, who shouldered the burden of daily chores one moment and posed as a symbol of community leadership the next.

However, per standard practice of a Life photographer, Parks handed over his negatives to the magazine’s editors, forfeiting control over their use and presentation. The resulting photo-essay, “Harlem Gang Leader,” was published in the November 1, 1948 issue. Almost every picture selected–and the subsequent reshaping of those photographs through drastic cropping–were chosen to visually underscore the pre-conceived notion that Jackson was a criminal.

Gordon Parks was born into poverty and segregation in Fort Scott, Kansas, in 1912. An itinerant laborer, he worked as a brothel pianist and railcar porter, among other jobs, before buying a camera at a pawnshop, training himself, and becoming a photographer. During his storied tenures photographing for the Farm Security Administration (1941–1945) and Life magazine (1948–c. 1971), Parks evolved into a modern-day Renaissance man; he found success as a film director, writer, and composer. The first African American director to helm a major motion picture, he helped launch the blaxploitation genre with his film Shaft (1971). He wrote numerous memoirs, novels, and books of poetry, and received countless awards, including the National Medal of Arts, and more than fifty honorary degrees. Parks died in 2006.

The Gordon Parks Foundation’s mission is to permanently preserve the work of Gordon Parks, make it available to the public through exhibitions, books, and electronic media, and support artistic and educational activities that advance what Parks described as “the common search for a better life and a better world.” The primary purpose of The Gordon Parks Foundation’s exhibition space is to present focused exhibits of Parks’ photography, as part of the Foundation’s commitment to educating the public and preserving his work.