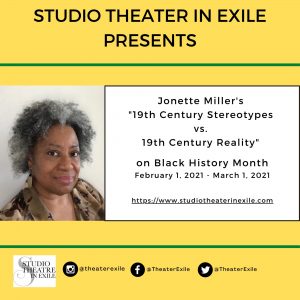 Studio Theater in Exile is presenting “19th Century Stereotypes vs. 19th Century Reality” by Jonette O’Kelley Miller as a virtual exhibition for the month of February 2021 in celebration of Black History Month.

Jonette O’Kelley Miller states: The purpose for “19th Century Stereotypes vs. 19th Century Reality” is to plant seeds and serve as an example that African Americans (and all people of color in the United States) walk in intelligence, creativity, and, humanity.”

Given the current disinformation and outright lies concerning people of color (and their allies) who actively demonstrate for social justice, “19th Century Stereotypes vs. 19th Century Reality” is presented here to expose, as well as,  to remind the viewer of America’s racist history regarding people of color.  As reflected in the historical images here, African Americans continue to have to battle with and resist hateful ideas based in ignorance and/or bias regarding where our ‘place’ is supposed to be in this society. ”

Jonette O’Kelley Miller is an independent art historian and art consultant. She recently co-curated the “Black Lives Matter” exhibition as part of the Black Renaissance Festival at the Ann Street Gallery in Newburgh, NY and was the guest editor of Vol.30.2 of The International Review of African American Art.  Her chosen theme was “The Evolving Imagery of The Black Woman.”  Her current research addresses the impact of historical, racist stereotypes on people of color: African Americans, Chicanos, and Native Americans.

Studio Theater in Exile, founded by Mara Mills and Jeremy Gratt to produce original works, held their wildly popular first virtual exhibition “Climbing the Walls” this past spring and fall. Since COVID and quarantine are still part of life, Climbing the Walls will continue to live on with new works going up. Stereotypes vs. 19th Century Reality” will be presented free of charge on Studio Theater in Exile’s website. Work of all the participants can be found on www.studiotheaterinexile.com/climbing-the-walls.

Studio Theater in Exile is committed to working with underrepresented voices, both in the playwrights and content of plays we produce. Our productions explore difficult issues of identity, conflict, and displacement. Prioritizing audience interface, we partner with libraries, museums, galleries, and community centers. Theater promotes dialogue. We seek that connection.

mission: Studio Theater in Exile collaborates with playwrights and performers to create and develop original work. Studio Theater in Exile is a company without a space that collaborates with its environment. It is an outgrowth of the belief that theater takes place anywhere and can be performed anywhere – in the streets, galleries, libraries, museums, black boxes, backyards, and even on a stage. We have been working with performers and playwrights to develop work that can be performed in any venue. Co-founders, Mara Mills and Jeremy Gratt have worked together, since 1991, to present original work, based on the art in an exhibition, a social justice issue, history, or the spark of an idea. Karina Ramsey joined Studio Theater in Exile in 2018.