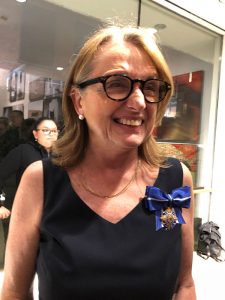 October 29, 2018, Yonkers, NY – Sarah Lawrence art history faculty member Jerrilynn Dodds has been awarded The Cross of the Order of Civil Merit by the Spanish government.

Dodds accepted the medal at a ceremony at the Spanish Consulate in Manhattan on October 23, where she was introduced by Philippe de Montebello. The medal is one of two bestowed by the country’s Ministry of Foreign Affairs to Spanish citizens or foreigners who have “rendered distinguished services to Spain.”

“Professor Dodds is an eminent Hispanicist. She has made outstanding contributions to the study of the medieval and early-modern states that emerged on the Iberian Peninsula, an understanding of which is essential to our comprehension of present-day Spain,’’ said Juan José Herrera de la Muela, Consul for Cultural Affairs at the Consulate General of Spain, New York.

Herrera de la Muela added that through her writings on Spanish art and architecture, Dodds has contributed to a greater understanding of Spanish history and culture.

“Professor Dodds has convincingly argued for the necessity of studying the complex processes of cultural interaction that took place between the Christian, Jewish, and Muslim communities of the Iberian Peninsula. Furthermore, as a distinguished teacher at Sarah Lawrence College, Professor Dodds has explored innovative ways of teaching Spanish art and history.”

Dodds’ work has centered on issues of transculturation in the arts—in particular, among Christians, Jews, and Muslims—and how groups form identities through art and architecture. She holds special interests in the arts of Spain and the history of architecture. Dodds is author of Architecture and Ideology in Early Medieval Spain and NY Masjid: The Mosques of New York and co-author of Arts of Intimacy: Christians, Jews and Muslims in the Making of Castilian Culture. She has also curated exhibitions at the Metropolitan Museum of Art and The Jewish Museum, among other locations, and edited influential catalogues, among them: Al Andalus, The Arts of Islamic Spain, for the Metropolitan Museum. Dodds holds a BA from Barnard College and earned her MA and PhD from Harvard University. She was Dean of the College at Sarah Lawrence from 2009-2015. In 2016 she was awarded a fellowship from the John Simon Guggenheim Foundation and in 2017 was awarded the Slade Professorship of Fine Arts at the University of Oxford for the 2020-2021 academic year.

“I am deeply moved by the enormous honor accorded to me by the Government of the Kingdom of Spain,’’ said Dodds. “To work on the Iberian Peninsula has been the great joy of my professional life; it has provided me with stimulating colleagues, deeply humane encounters, generous institutions of learning and the most brilliant, rich histories of the most extraordinary and unique artistic heritage imaginable.”