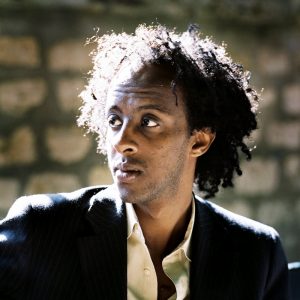 Purchase College-SUNY will host Dinaw Mengestu: A Reading and Conversation on Tuesday, Nov. 13, 2018, at 4:30 p.m. The program, which is free and open to the public, will take place at Purchase College in the Library, 2nd Floor (735 Anderson Hill Road, Purchase, NY). It is the finale of this season’s Durst Distinguished Lecture Series, which brings some of the literary world’s most acclaimed authors to the Westchester community.

Dinaw Mengestu is the author of three novels: The Beautiful Things That Heaven Bears, How to Read the Air, and All Our Names. A recipient of a Lannan Foundation Fellowship and a grant from the MacArthur Foundation, Mengestu was named a “20 Under 40″ by The New Yorker. His essays and fiction have appeared in, among other places, The New Yorker, Rolling Stone, Harper’s, and Granta.

“Mengestu is an essential author for our moment,” said Aviva Taubenfeld, interim chair of the School of Humanities and associate professor of literature, Purchase College. “In simple, aching prose, he writes of ‘the special loneliness’ of the refugee who has ‘no one who knew him before he had come here, who could remind him, simply by being there, that he was someone else entirely.’ And he writes of both the impossibility and the utter necessity of attempting to know another in all their names.”

According to Mehdi Okasi, assistant professor of creative writing at Purchase College, “Dinaw Mengestu’s work lyrically evokes the tensions between history and place, between the self and the nation. Home is a fragile concept in his fiction. Characters who’ve escaped tragic wars and political bloodshed arrive in America to build new homes in communities that expect a particular narrative from ‘the immigrant,’ expectations that often confound his characters as they negotiate American society in all its complexities, its fraught history of race and class.”

He added, “Here, they struggle to redefine home and self as the weight of the past haunts the possibilities of their future. But above all, Mengestu is concerned with the human heart, its resilience, its capacity for love and beauty despite the tragedies so rife in this world.”