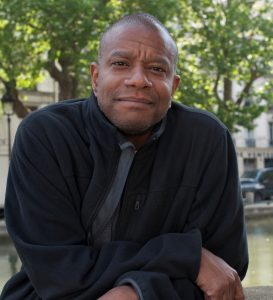 Purchase College-SUNY will host Paul Beatty on Tuesday, October 17, at 4:30 p.m. The program, which is free and open to the public, will take place in the Humanities Theatre at Purchase College (735 Anderson Hill Road, Purchase, NY). The event is a part of the Durst Distinguished Lecture Series, which brings some of the world’s most acclaimed writers to the Westchester community.

In 2016, the novelist and poet Paul Beatty became the first American ever to win the Man Booker Prize for Fiction for The Sellout. The novel, which also won the National Book Critics Circle Award, was described in the Los Angeles Times as “among the most important and difficult American novels written in the 21st century.” Beatty has published three other notable works—Slumberland, Tuff, and The White Boy Shuffle—as well as two collections of poetry.

“The first page of Beatty’s The Sellout made me explode in appreciative and awed laughter,” said Jennifer Uleman, professor of philosophy at Purchase College. “Such explosions are not like me, especially not in a quiet bookshop. I dropped the book in my basket and have never looked back!”

According to Mariel Rodney, assistant professor of literature at Purchase College, “Long before the runaway success of The Sellout, Paul Beatty’s novels set us aflame with his incendiary prose and thoughtful meditations on race. These comic gems have sharp edges of epic psychic proportions. Unsurprisingly, Beatty’s novels leave us wide open wondering how we ever lived without them.”

Purchase College has named best-selling, Pulitzer Prize-winning novelist Michael Chabon as its 2017-2018 Roy & Shirley Durst Distinguished Chair in Literature. Mr. Chabon visited the college in September and will return for events on Nov. 1-2.