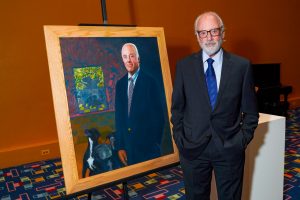 Purchase College honored the achievements of President Thomas J. Schwarz on May 8 at a special celebration marking his stepping down as president at the end of this semester. More than 200 people were in attendance at the festive dinner event at The Performing Arts Center on campus. The program’s Master of Ceremonies were led by the celebrated actor and alumnus Jay O. Sanders ’76 and alumna Assemblywoman Latrice Walker ’01. Special guests included distinguished alumni, elected officials, and Purchase leadership.

In addition to remarks from Purchase College leadership, Jazz Studies students from the Conservatory of Music performed, a video tribute was shown, and President Schwarz’s presidential painting by professor emeritus Murray Zimiles was unveiled. Assemblywoman Latrice Walker read a letter from Governor Cuomo in honor of the event and presented a legislative proclamation sponsored by both houses commemorating Schwarz’s tenure as president.
President Schwarz, who is one of the longest serving presidents in the SUNY system, was named the fifth President of Purchase in 2003. He arrived at Purchase as Acting President in January 2002.

Under President Schwarz’s leadership, the college has experienced a significant improvement in retention and graduation rates; has increased its endowment from approximately $35 million to more than $90 million; and has undergone significant renovations and commissioned new structures, including the forthcoming Center for Media, Film, and Theatre. All new and renovated structures are reflective of the campus commitment to environmental and social responsibilities.

Additionally, President Schwarz has embraced entrepreneurship in an effort to create new revenue streams that support the mission of the college. One of his most innovative projects is Broadview, a senior living community currently in development for the campus. Following his departure, President Schwarz will continue to be a member of the Board that is directing the project. In his remarks at the event, President Schwarz shared his optimism for the future of the college and urged the attendees to continue to fight for support of public education.

Before coming to Purchase College, President Schwarz had a distinguished career as a partner at the law firm of Skadden, Arps, Slate, Meagher & Flom, where he was National Practice Leader of the Litigation Department and was the founding partner of the firm’s Committee on Diversity.

President Schwarz earned a BA in economics from Hamilton College and a JD from Fordham Law School where he served on the Law Review.

In the near future, the College Council will form a committee of council members, faculty, staff, students, and alumni to oversee a search for a new president. Dennis Craig, VP of Student Affairs and Enrollment Management has been named by the SUNY Board of Trustees as Interim President for the 2019-2020 academic year.

About Purchase College, SUNY
Purchase College, part of the State University of New York (SUNY) network of 64 universities and colleges, was founded in 1967 by Governor Nelson Rockefeller. His aspiration for Purchase was to create a dynamic campus that combined conservatory training in the visual and performing arts with programs in the liberal arts and sciences, in order to inspire an appreciation for both intellectual and artistic talents in all students. Today, Purchase College–SUNY is a community of students, faculty, and friends where open-minded engagement with the creative process leads to a lifetime of intellectual growth and professional opportunity. For more information about the College, visit www.purchase.edu.