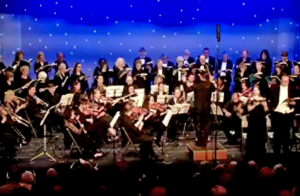 Westchester Oratorio Society resumes weekly rehearsals on Tuesday evenings in January, beginning January 7, for the spring portion of its 2019 – 2020 Season, the group’s 22nd, which will be highlighted by a May 3, 2020 performance of J.S. Bach’s “Mass in B minor,” BWV 232.

As cited in Wikipedia, the “Mass in B minor” was described in the 19th century by the editor Hans Georg Nägeli as “The Announcement of the Greatest Musical Work of All Times and All People.”

Rehearsals are held on Tuesday evenings from 7 to 9:15 pm in the brightly lit, climate-controlled Garden Room at the Katonah (NY) Village Library, 26 Bedford Road—a short walk from the Metro North station.

Competent singers in all voice parts with an ability to read music are welcome to join and invited to attend an Open House Rehearsal on Tuesday, January 21 at 7 PM or any other January rehearsal that might be more convenient.

Artistic Director Benjamin Niemczyk, now in his thirteenth season with the group, is an accomplished conductor, singer and composer who is a co-founder of both the New Westchester Symphony Orchestra and C4 (The Choral Composer—Conductor Collective). Accompanist, Mun-Tzung Wong, is a concert level pianists and professional vocal coach. Her other positions include with the St. Petersburg Opera (FL) and the Manhattan School of Music.