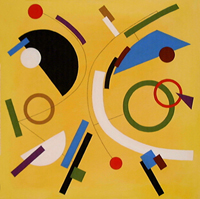 Stanley Eisenman was born in 1935 and grew up in Brooklyn, NY. He attended Lincoln High School where his aptitude for art was recognized and cultivated by his teacher Leon Friend, a highly respected expert and author in the field of art and graphics. He continued his education at Brooklyn College, where he majored in art and took courses with some of the most respected artists of the time. He studied sculpture with Burgoyne Diller, painting with Ad Reinhart, Carl Holty and Jimmy Ernst, lithography and etching with the surrealist Curt Selegmann and graphic arts with Ivan Chermayeff. He graduated with honors and received the All Arts Award. That same year Mr. Chermayeff offered him a position at his firm, the legendary graphic design office of Brownjohn, Chermayeff & Geismar. While employed there he won numerous AIGA and Art Directors awards for excellence in design. In 1961 he founded Eisenman Associates (www.eisenman.com) which continues to be an award winning, highly respected graphic design firm. He designed logos, posters, brouchures, magazines and annual reports, many of which were recognized to be the finest in the industry, for corporations such as PepsiCo, Philip Morris, Land Lakes, TWA and Mirage Resorts among others. He also designed exhibits for the Pepsi-Cola Company. One called Optical Illusions included three-dimensional illusions allowing visitors to not only see the illusion but to also be part of it. Another called Puzzles allowed visitors to actually try and solve the puzzles that were on display. He also designed a number of Christmas exhibits, one consisted of fanciful abstract Christmas trees that were displayed in the lobby of Pepsi-ColasWorld headquarters building on Park Avenue. Another was made up of giant toys, and was featured in Life Magazine. In 1970 he was one of 12 leading designers, asked by the Moratorium Committee Against the War in Vietnam, to create a Peace poster, which was then exhibited at the OK Harris Gallery in New York City. In 2005 the poster was featured in The Design of Dessent published by Rockport Publishers. Never during his career as a graphic designer did he ever put aside his love for painting and sculpting. Now retired, he concentrates on his artwork. In December of 2004, his One Man show at the Hiram Halle Memorial Library in Pound Ridge NY got an outstanding review in The Record-Review. In his current work he explores the exciting relationships that can be achieved with simple elements to create a complex but harmonious result. Just as in music, where you have different notes and instruments that have to come together to produce a beautiful sound, I explore the inexhaustible relationships between color, shape and line to create an abstract, dynamic visual equilibrium.