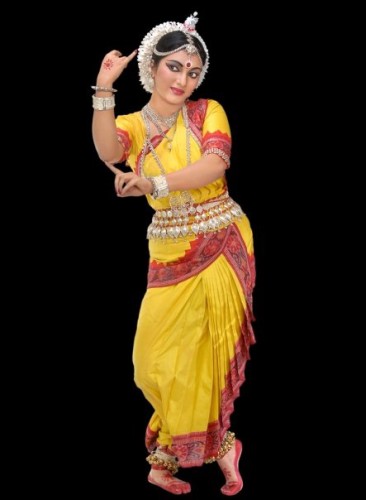 Priyadarshini was tutored in the nuances of Odissi by her mother Guru Dipanwita Roy, an internationally acclaimed exponent of Odissi and senior disciple of the Odissi legend Padmavibhushan Guru Kelucharan Mohapatra. Priyadarshini’s first performance was at age four and at six she made her solo debut on television (Doordarshan Calcutta). She has since performed solo and in groups at numerous cultural centers in India, Europe, and the US, and also on television. Priyadarshini’s best memories are of dance demonstrations and performances to promote Indian culture at schools and universities in Europe and the US. In the recent past, Priyadarshini has performed or held workshops and demonstrations at prestigious venues such as the Nehru Centre (Indian High Commission) in London, Auditorium du Musée Guimet in Paris, Alvin Ailey American Dance Theater in New York, and National Television in India. She has worked in experimental projects with other Indian classical dance forms, Western classical, and contemporary, all of which were critically acclaimed by the press and audience. Priyadarshini cherishes playing the lead roles in the prestigious dance-theater productions – Rabindranath Tagore’s Chitrangada, and Bhanusingher Padabali, produced by Dr. Ananda Gupta and the Forum for Indian Performing Arts in London, and Saundarya, a cross-cultural dance-theater based on the story of Cinderella, presented by Shibaranjani in Calcutta. Priyadarshini holds the Prabhakar Degree in Odissi (with Distinction) from Prayag Sangit Samiti, Allahabad. She has also trained in Kathak, Indlan classical music and Rabindrasangeet. Priyadarshini has received several awards and accolades for dance, music and dramatics, including the Siranama Award for “The Best Upcoming Dancer” and the Sangit Kala Mandir "Best Performer" award in 2002. During her time in school and university, Priyadarshini became renowned in Calcutta’s young artists’ circle having choreographed and participated in numerous Indian classical and Western dance competitions as a solo artist, or in groups as the lead dancer, and she won several laurels for her institutions, so much so that she represented her institutions in every annual competitive event. In 2004, The Telegraph reported her achievements in the column “Star Spot”. Priyadarshini is passionate about teaching dance and choreography. Since the age of eleven she has choreographed and trained several award-winning dance teams. In 2002 she began teaching Odissi at Dipanwita’s school Shibaranjani and another organization Sangeetayan based in Calcutta. On moving to New York in 2010, Priyadarshini started holding Odissi classes at Navatman in NYC, and is also currently teaching at various locations in NY and CT.  Under the guidance of her illustrious mother, and other renowned gurus under whom she continues to train in Odissi and Abhinaya through regular workshops and intensives, Priyadarshini has developed into an established young artist of immense talent and reputation of her own.