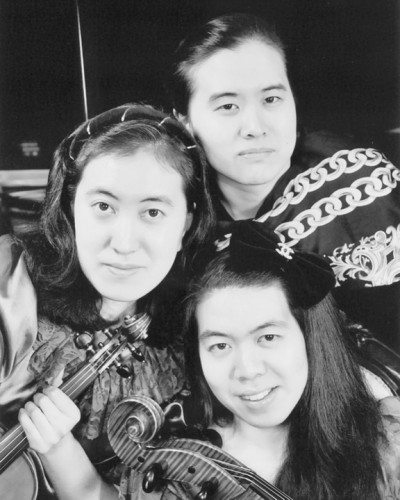 B.M., The Eastman School of Music

Sisters Mimi Furuya on cello, Sakiko Furuya on piano and Harumi Furuya on violin have achieved stunning accomplishments in their careers.

Mimi has toured extensively throughout Western Europe and across the U.S. She has received numerous prizes and awards including first prize at the NY American String Teachers Association Solo Competition and second prize at the 41st International Sorantin Competition. Her compositions have been performed by the Juilliard Orchestra and the American Brass Quintet.

Sakiko has been delighting audiences since her California debut at age 8. She has performed extensively throughout the U.S. and Europe and was the featured performer in the Salzburg Seminar Series in Schloß Leopoldskron in Salzburg, Austria. She has won first prizes at many solo and concerto competitions in New York, including the US National Foundation for the Advancement in the Arts and the Gina Bachauer Memorial Scholarship Competition at Juilliard. Her compositions have been performed several times at Paul Hall at Juilliard. She has appeared as soloist with the Bloomingdale Chamber Orchestra, the Yonkers Philharmonic, and the Chappaqua Orchestra.

Harumi began studying violin at age 2 and has pursued violin studies in Boston, London, Paris and Berlin. She is a scholar of history having received an A.B. in history with highest honors and PhD in Government from Harvard University, an M. Phil in European Studies from the University of Cambridge, in addition to numerous other prizes and fellowships for her academic skill. Harumi has performed in Alice Tully Hall at Lincoln Center in New York City, Dvorak Hall in Prague, Liszt Academy in Budapest, Royal British Legion in Cambridge, and Westminster Abbey in London.

The Furuya Sisters are the great grandnieces of Prime Minister Baron Kijuro Shidehara who was responsible for Article 9 (Peace Clause) of the Japanese Constitution.  http://www.FuruyaSisters.com