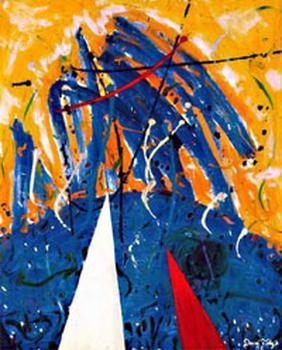 Evolution is a life process. My artistic journey has taken me to a place of both "reductionism" - the hunt for the smallest building blocks of more complex organisms, and a "synthesis" of past artistic endeavors. Fewer colors and broader painted gestures are part of this evolution. As a professional violinist as well as a painter and sculptor, most of my visual arts work is related to music. I came to realize that many miniature paintings exist in the details of my more complicated compositions, and in working with many of the same formal elements I also had visions of Asian calligraphy - "saying more with less." My newest paintings, "Imaginaries" are Rorschach tests for the viewer. They stimulate the imagination as the audience experiences their rhythm and flow. I also realized my artistic connection with my father's "Curvilinear" style - the use of Einstein's curved space and time. My experiences as a professional musician strongly influence the presence of rhythm in my "Imaginaries". Before painting, I contemplate many internal visualizations as being possible painting solutions. When ready, I jump to the canvas.