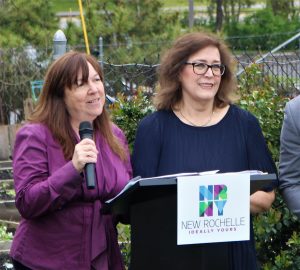 New Rochelle has joined the “Little Free Library” movement, with “Pop-Up Library” kiosks  installed in 4 public parks. The concept behind these book exchange boxes is simple: Take a book or leave a book. The goal is to promote literacy and the love of reading, and to build a sense of community, while also creating unique public art, because each of New Rochelle’s library kiosks was embellished by a different artist.

On Tuesday, May 14th the New Rochelle Council on the Arts and My Brother’s Keeper New Rochelle held a Dedication Celebration at Lincoln Park. The date was chosen to tie into the Little Free Library organization’s 10th anniversary celebration the week of May 17th. During this week everyone is invited to visit a Little Free Library (there are 80,000 in all 50 states and 90+ countries) and share a book, then post a photo on Facebook, Twitter or Instagram with the hashtag #LFL10.

The Pop-Up Libraries installed in New Rochelle so far can be found at Hudson Park, Huguenot Park, Lincoln Park and Paws Place dog park at Ward Acres Park, with two more yet to be situated. (A larger installation, created by pop artist Charles Fazzino, will be installed at Montefiore Hospital later this summer.) Each has been stocked with books and will be maintained by a volunteer “steward.” The Pop-Up Libraries function on the honor system, with users asked to take — or leave — a book or two.

Little Free Library is a worldwide book-sharing movement that began in 2009 when Todd H. Bol created the first book exchange and placed it in his Hudson, Wisconsin, front yard in tribute to his mother, who had been a teacher. Ten years later, his idea has snowballed, with more than 80,000 Little Free Libraries around the globe, from Argentina to Zambia. New Rochelle’s Pop-Up Library project takes the idea a step further, incorporating local artists into the mix. In addition to Charles Fazzino they include Carol Bowen, Cristina Cerone, Alvin Clayton, Laura Heiss, Stephanie Lombardo and Aston LeMelle Thomas.

Pop-Up Library organizers Colleen Davis Gardephe of MBK New Ro and Theresa Kump Leghorn of NRCA say that if New Rochelle’s library kiosks prove popular they hope to expand the program with another round of kiosks in the future. “We focused on park locations for the first phase but would consider creating Pop-Up Libraries for schools and other public gathering places in a follow-up outreach,” says Gardephe. “Donations for the project are welcome,” adds Leghorn. Donations earmarked for the Pop-Up Library project can be sent to the New Rochelle Council on the Arts at 515 North Avenue, New Rochelle, NY 10801 or made on line at http://newrochellearts.org/make-a-donation/