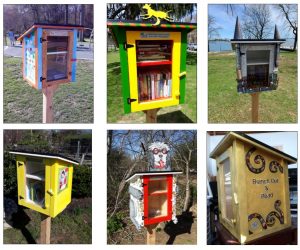 New Rochelle has joined the “Little Free Library” movement: Five “Pop-Up Library” kiosks have been installed in public parks, with two more to follow in the next few weeks. The concept is simple: Take a book or leave a book. The goal is to promote literacy and the love of reading, and to build a sense of community, while also creating unique public art, because each of New Rochelle’s library kiosks was embellished by a different artist.

The Pop-Up Library kiosks installed this week can be found at Flowers Park, Hudson Park, Huguenot Park, Lincoln Park and Paws Place dog park at Ward Acres Park. Each has been stocked with books and will be maintained by a volunteer “steward.”

The worldwide book-sharing movement began in 2009 when Todd H. Bol created the first Little Free Library book exchange and placed it in his Hudson, Wisconsin, front yard in tribute to his mother, who had been a teacher. Ten years later, his idea has snowballed, with more than 80,000 Little Free Libraries in all 50 states and 90+ countries, from Argentina to Zambia.

Because of these Little Free Libraries, more than 120 million books have been shared and thousands of neighbors have connected for the first time!

The project’s creators are long-time friends and colleagues Colleen Davis Gardephe, Managing Director of My Brother’s Keeper, and Theresa Kump Leghorn, President of the New Rochelle Council on the Arts. With support from the New Rochelle Public Library and the City’s Department of Parks & recreation, the duo put together funding and, in June, 2018, issued an RFP inviting Westchester County artists and designers to submit their proposals to customize and embellish the proposed kiosks. Six artists were chosen and, along with Charles Fazzino. each received one of the Little Free Library pre-assembled kits to complete.

Every one of the finished kiosks reflects the artist’s unique vision. For example, artist Laura Heiss, a retired art teacher who is now the Director of the Museum of Arts & Culture at New Rochelle High School, created her kiosk as a tribute to Rosie, her sheepdog. She says the “milk bone meteor shower” and “raining dog biscuits” designs are frequent themes in her art work — and obviously artist Red Grooms was also a source of inspiration with his wit and whimsy. Heiss’ design has been installed at Paws Place, the dog park that is part of Ward Acres Park.

Art teacher Carol Bowen, a teacher at The Dalton School, was inspired by Gustav Klimt’s work “The Tree of Life:” Her Pop-Up Library kiosk features a gorgeous ceramic mosaic design and the words “Branch Out and Read.” Artist Stephanie Lombardo drew her inspiration from a favorite childhood book, “Goodnight Moon.” And artist Cristina Cerone designed her kiosk with a Harry Potter theme, right down to the Hogwarts logo on the floor!

Pop-Up Library organizers Colleen Davis Gardephe of MBK and Theresa Kump Leghorn of NRCA say that if New Rochelle’s library kiosks prove popular they hope to expand the program with another round of kiosks in the future. “We imagine that local businesses, schools and houses of worship will want to get on board and have their own Pop-Up Library kiosks!” says Gardephe. “Donations for the project are welcome,” adds Leghorn.

The Pop-Up Library artists are:

Carol Bowen, a teacher of Visual Art at The Dalton School in Manhattan. She has been a member of the Middle and High Schools’ Art Department faculty since 1998, and served as Department chair from 1999-2001.  She has a B.A. in Studio Art from Mt. Holyoke College, an M.F.A., Concentration in Painting, from Tulane University, and a M.A.T. (Master of Arts in Teaching), Concentration in Arts Education, from Rhode Island College. Ms. Bowen‘s past art teaching experiences include the Rhode Island School of Design, Rhode Island College, Massachusetts College of Art, Art Institute of Boston, The Staten Island Children’s Museum and the American Museum of Natural History. Ms. Bowen has been a mosaic artist for the past ten years, studying with Luciana Notturni at The Mosaic Art School in Ravenna, Italy.

Cristina Cerone,  a photographer who says “My Canon 60D EOS is my third eye now and is rarely off from around my neck.” She is the Vice President of Got Art?, Inc. which is a 501c3 organization curating exhibits as well as exhibiting her own work. She also teaches digital photography and photographs artwork for artists for their personal websites. Her commercial photography work includes portraits and party photography.

Alvin Clayton is a painter, model and restaurateur. After graduating from St. Mary’s University in Emmetsburg, MD Clayton began modeling with the Wilhelmina agency in New York, landing jobs with major fashion magazines like GQ, Vogue, Vanity Fair, Esquire, Glamour and Self. His work took him all over the world, and it was while living in Paris that he taught himself to paint. His biggest influence was Henri Matisse, whose paintings he studied intently —and whose bright color palette reminded him of Trinidad, his birthplace. Today his vivid paintings are featured on the walls of his own restaurant, Alvin & Friends in New Rochelle, as well as the homes of celebrity collectors. His paintings were recently featured in the film “The Best Man Holiday” directed by Malcolm Lee. He had a one-man show at Iona College’s Brother Kenneth Chapman Gallery in January/February 2019.

Charles Fazzino, a graduate of the School of Visual Arts in New York City,  is one of the most popular and highly collected pop artists of all time. During his more-than-thirty years as a pop artist, he has inserted his unique, detailed, vibrant, and three-dimensional style of artwork into the very fabric of popular culture. Fazzino’s artworks are exhibited in hundreds of museums and galleries in more than 20 different countries. He has received many private and important commissions and has been selected as the official artist for festivals and events all over the world. Charles is often referred to as a pop culture historian because of the breadth of his work and the way it touches his collectors and captures the best parts of their contemporary lives. His legacy will mark him as part of the next generation of famous pop artists as he follows the paths originally forged by pop art pioneers such as Andy Warhol, Keith Haring, Red Grooms, and Roy Lichtenstein. Fazzino’s studio is located in New Rochelle, and he is a board member of the New Rochelle Council on the Arts.

Laura Heiss is the Director of Gallery at the Museum of Arts & Culture at New Rochelle High School. She was born and raised in New Rochelle where Hudson Park provided a childhood of adventure. “Swimming, building rafts, hide and go seek…..but best of all, an occasional art lesson in the gazebo overlooking Long Island Sound. I don’t remember who she was, or why she was there, but the best day of my life was when that sweet old lady handed me a pad and pencil and showed me how to put it all down on paper.” Twenty years later Laura Heiss became an art teacher in the New Rochelle School District, starting out at her alma mater, Trinity School and ending the best 40 years of her life at Albert Leonard Middle School before becoming the director of the Museum of Art & Culture. Heiss holds a Bachelor’s degree in Fine and Studio Arts from the State University of New York at Cortland.

Aston LeMelle-Thomas is an illustrator, designer, and all-around creative artist based out of the greater New York City area. A graduate of New Rochelle High School, he received a Bachelor of Fine Arts in Illustration from the School of Visual Arts in 2013.  LeMelle-Thomas has described himself as a “fine art ninja” who attacks each project with “a sense of unbridled intensity and alarming precision.” In 2016 LeMelle-Thomas was selected from 26 entrants as the winner of the competition to create a mural for the North Avenue façade of the Dollar Tree store.

Stephanie Lombardo is a lifelong resident of New Rochelle who says she remembers when her Mom took her to the NRPL for her first library card. “It was a magical and inspirational experience,” she says, and her design – inspired by the children’s classic “Goodnight Moon” – is meant to “showcase the importance of reading at an early age, and how books create the foundation for success.” Ms. Lombardo is an educator who works with children who have autism and related disabilities. “Part of my job is to teach students how to read, and to help them develop their passion for reading.  I find it to be rewarding to see my students gain confidence, increase their reading abilities, and feel a sense of accomplishment after completing a book.” A graduate of the College of New Rochelle School of New Resources, Ms. Lombardo is a NYS certified Teacher Assistant. She was one of the artists selected for the NRNY Stacked Sculptures, and her work was recently displayed at the Pelham Art Center Faculty and Student Show.

In 2015, New Rochelle Mayor Noam Bramson and Schools Superintendent Brian Osborne accepted President Obama’s My Brother’s Keeper Community Challenge, making New Rochelle the first MBK community in Westchester County. 120 local and regional organizations have agreed to support New Rochelle’s MBK efforts. New Rochelle is committed to working to ensure that all of its children and young adults, particularly our boys and young men of color, reach all six Milestones in the MBK initiative. The community is also dedicated to seeing that opportunity gaps encountered by many boys and young men of color are closed.

Milestone 2: All students are reading at grade level by third grade.

MBK is confident that this exciting public art project will engage our entire community while providing books to children and families who are less likely to have access to high quality reading material.

About the New Rochelle Council on the Arts (NRCA)

The New Rochelle Council on the Arts has a commitment to sponsoring public art and creating collaborations with other city organizations to create projects which enhance its mission. “The NRCA has been a leader in creating public art for New Rochelle, from one of the first mural installations downtown – Steal Away by Jeff Schlanger, which was unveiled at 41 Lawton Street in 2008 —  to the Fleur-de-Lys project in 2014,” says Theresa Kump Leghorn, NRCA President. “NRCA believes public art is important because it enhances quality of life and brings art into the every day experience of the entire community, while demonstrating civic pride and defining a positive sense of identity.”

The Pop-Up Libraries project was funded by My Brother’s Keeper and the New Rochelle Council on the Arts, through a grant from Arts Westchester with support from Westchester County Government.

Previous post:
« Westchester Writers Wanted for THE WRITE STUFF: Honoring Westchester’s Legends & Legacies
Next post:
"The Eye of the Beholder" Opens at Rotunda Gallery May 14th »