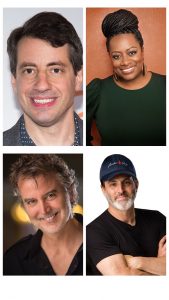 Get ready for some real fun!  Direct from your TV screen, “Stars of Late Night” featuring performers from The Tonight Show, America’s Got Talent, Comedy Central, and more. Ray Ellin, Erin Jackson, Brian Scott McFadden, and Dan Naturman will have you in stitches.

Ellin is executive producer of Comedy Central’s This Week at the Comedy Cellar and founder of www.ComedyCloud.co, producing live, interactive online comedy events throughout the year for businesses and non-for-profit organizations. Ray was profiled on “Dateline NBC,” where he revealed that his blood pressure actually drops when he’s onstage (!). Popular host of Late Net with Ray Ellin, the show featured A-List celebrities, top comedians, musicians and celebs including Chevy Chase, Hank Azaria, Leonard Nimoy, Paul Shaffer, Fran Drescher, and more. Ray was also the host/writer of TV’s New York Now, Brain Fuel, and The Movie Loft.

Erin Jackson Erin Jackson is one of the fastest-rising comedians in New York City. She works nightly in the city’s top comedy clubs, and most recently made her Netflix debut as part of Season Two of Tiffany Haddish Presents: They Ready. She currently writes for the hit Netflix show, The Upshaws, and has appeared on Late Night with Seth Meyers, CONAN, The Ellen DeGeneres Show, This Week at the Comedy Cellar, and Last Comic Standing. She is a proud alumna of Howard University and a die-hard fan of the Philadelphia Eagles.

A regular on the NY comedy club circuit, Brian has recently taken his act to a whole new level with his high energy performances and some of the most unique, hilarious routines around. After making his début on The Late Show with David Letterman, Brian appeared on The Late Late Show with Craig Ferguson on CBS-TV. Brian was recently seen on the big screen in The Secret Life of Walter Mitty with Ben Stiller, & also performed in such films as Ice Age II with Ray Romano, and Robots with Robin Williams & Halle Berry. He recently released his first live Comedy CD “What Women Want”.

Dan Naturman has had many television appearances, including those on The Late Show with David Letterman, The Tonight Show, Conan, Last Comic Standing, and as a semi-finalist on America’s Got Talent. He also has his own Comedy Central Presents special, and recently wrote the novel IRA SPIRO: BEFORE COVID, available on Amazon.