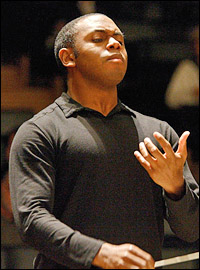 (Purchase, New York) — The Westchester Philharmonic’s 33rd season comes to a close on Sunday, June 19 at 3 pm at the Performing Arts Center at Purchase College when conductor Kazem Abdullah takes the stage to lead the Philharmonic and pianist Alon Goldstein in works by Falla, Mozart and Brahms. A post-concert Father’s Day BBQ with the artists follows to celebrate the season.

Continuing its reputation as a launching pad for new, young talent (Joshua Bell, Midori, and Gil Shaham performed with the Phil as little-known teenagers), American conductor Kazem Abdullah and Israeli pianist Alon Goldstein will team up on June 19 for Brahms’ towering Piano Concerto No. 1. After serving as James Levine’s hand-picked assistant conductor at the Metropolitan Opera, Abdullah has guest-conducted major orchestras across Europe and the Americas and currently serves as the Music director for the City of Aachen, Germany. Goldstein made his debut at age 18 with Zubin Mehta and the Israel Philharmonic. The concert opens with Manuel de Falla’s exotic Ritual Fire Dance from El amor brujo, with its famous oboe solo, and continues with Mozart’s glorious final Symphony No. 41, “Jupiter.”

Father’s Day celebrants will then enjoy another new Phil tradition: Burgers, Beers & Brahms. Join conductor Kazem Abdullah, pianist Alon Goldstein and members of the orchestra for a fun-filled Father’s Day celebration right after the concert. Featuring cold beer from Captain Lawrence Brewery in Elmsford plus burgers, hot dogs, soda and sides. Including live bluegrass music and a chance to mingle with the artists.

One hour before the concert, listeners are invited to a preconcert discussion of the program with Kazem Abdullah and Alon Goldstein led by Artistic and Executive Director Joshua Worby. A free open rehearsal is scheduled for 11 am on June 19 in the concert hall. Children and families welcome.

All performances will take place in The Concert Hall at The Performing Arts Center, Purchase College, 735 Anderson Hill Road, Purchase, New York. A pre-concert discussion with the artists takes place inside the concert hall at 2 pm.

Single tickets range from $97-$30. BBQ tickets for adults are $19 with a concert ticket purchase. Children under 12 are only $9. “Balcony & BBQ” tickets are only $45 ($22.50 for children) and include a balcony concert ticket and BBQ admission.

A free open rehearsal with the orchestra is scheduled for June 19 at 11 am in The Concert Hall. Children and families welcome. Coffee and donuts will be served for “Phil Families”. Please visit westchesterphil.org for information before attending.

About the Westchester Philharmonic

Now in its 33rd season, the Westchester Philharmonic is the oldest, continuously running professional symphony orchestra and largest performing arts organization of any kind in Westchester County. The Philharmonic’s main stage concert series makes its home at the 1,300 seat Concert Hall at the Purchase Performing Arts Center, with outdoor concerts, chamber concerts, children’s programs, and special events throughout the area, attracting savvy music-lovers from Rockland, Bergen, Fairfield, and Putnam counties, New York City, and beyond.

In November 2013 the Philharmonic proudly announced the concurrent appointments of Jaime Laredo and Ted Sperling as the orchestra’s Principal Conductors, commencing with the current 2014-15 season.

Founded in 1983 as the New Orchestra of Westchester under the leadership of Music Director Paul Lustig Dunkel (who became Music Director Emeritus in 2008), the orchestra was later re-named the Westchester Philharmonic. Renowned artists who have performed with the Phil include Joshua Bell, Jeremy Denk, Branford Marsalis, Midori, Garrick Ohlsson, Itzhak Perlman, Nadja Salerno-Sonnenberg, Gil Shaham, Isaac Stern, and André Watts.

Among the many new works commissioned and premiered by the Westchester Philharmonic is Melinda Wagner’s Concerto for Flute, Strings and Percussion, which won the Pulitzer Prize in 1999. A new commission by Christopher Theofanidis is scheduled for debut during the 2015 – 2016 season.

The orchestra’s award-winning education program reaches thousands of elementary school students each year and culminates in a full orchestra concert. The Phil also partners with local organizations to present free and low-cost chamber concerts, as well as to provide subsidized seating at main stage concerts, welcoming hundreds of area residents each year who might not otherwise have an opportunity to attend.

The orchestra is comprised of the finest professional free-lance musicians from around the greater metropolitan area, who also perform regularly with the New York City Ballet, Orchestra St. Luke’s, Orpheus, Mostly Mozart, and for many Broadway shows. Members of the Phil hold faculty positions at Juilliard, Mannes, Manhattan School of Music, Purchase Conservatory, Vassar and Bard Colleges, and at local public schools.

This season is also made possible, in part, by ArtsWestchester with  funds from Westchester County Government.

Open rehearsal at 11 am. Pre-concert discussion at 2 pm.