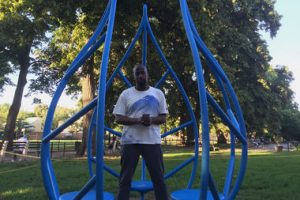 The artist shares on his installation: “The Conversation Sculpture is derived from my observation of how people use public space. Kids come to play. People exercise. Meet to talk. Or walk their dogs. This sculpture is for public use, just like a park or garden. I hope the seating in the sculpture will promote dialog, contemplation, and understanding.”

Hixson created The Conversation Sculpture for its original location in Herbert Von King Park in Brooklyn, NY after receiving the 2017 UNIQLO Park Expressions Grant. The sculpture arrives in its new location in time for Pelham’s celebration of Juneteenth. On Saturday, June 19th, The Village of Pelham Council on the Arts, The Picture House, Pelham Art Center, Pelham Chamber of Commerce, and student artists from Pelham Memorial High School will host free events at Wolfs Lane Park and The Picture House celebrating freedom and black culture. The public dedication for The Conversation Sculpture will take place at 1:00pm in Wolfs Lane Park.

Learn about the installation and Pelham Art Center’s public art program on their website.

Musa Hixson was born in Cleveland, Ohio but has mostly lived in Brooklyn, NY. He earned an MFA in Sculpture at Pratt Institute, Brooklyn, New York in 1998 and a BA in Comprehensive Art from Hampton University, Hampton Virginia, in 1995. Most recently his public sculpture (Fairmount Nebula) was included in Newark’s Fairmount Art Wall project. Hixson is a recipient of the 2017 UNIQLO Park Expressions Grant to produce the “Conversation Sculpture” for Herbert Von King Park in Brooklyn, NY. He was selected as artist-in-residence at Wave Hill, Winter Workspace, Bronx, New York in 2015, at The 3-D foundation, Verbier Switzerland in 2011, Obama City Art Residency, Obama Japan in 2010, Vermont Studio Center, Johnson Vermont in 2006, and Virginia Center for Creative Arts, Amherst, Virginia in 2005. In 2010 he was selected for the Aichi Triennale in Achi, Japan. Musa is also the founder of the Not for Profit Brooklyn Art Incubator.

Combining various materials with existing found objects, his multifarious art reflects assemblage, sculpture and large-scale immersive installations. Recurring motifs in his practice are the elliptical forms and spheres often repeated organically in nature. The artist attributes his interest in these forms to their structural sustainability and therefore prevalence in the universe.

Hixson’s art implies a lyrical collision of these binary worlds, resulting in visual interpretations embodying such formal elements of composition as; surface, depth, mark making and balance. Anthropological trends in human behavior are another core concern in the artist’s oeuvre. Evidenced by a subtle reference to symbolic, materials, imagery and objects interwoven.

Pelham Art Center is a non-proﬁt educational and cultural institution committed to providing public access to see, study and experience the arts, foster lifelong arts appreciation and thereby strengthen the community.  The Art Center was founded in 1970 and now serves more than 16,000 people each year. These events and programs are made possible, in part, by ArtsWestchester with funds from Westchester County Government. Pelham Art Center also receives funding from: New York State Council on the Arts, A State Agency; Pelham Community Members and Annual Fund Donors. Pelham Art Center thanks the Village of Pelham and  the Village of Pelham Council on the Arts (VoPCA)