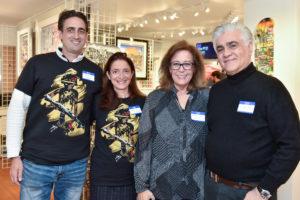 The New Rochelle Council on the Arts (NRCA) held a cocktail party fundraiser to celebrate the city’s newest public art, the #NRNYMurals, and offer a sneak peek at what’s to come.

The party was hosted by pop artist Charles Fazzino at his art-filled studio, and featured a conversation with the #NRNYMurals curators, Audrey and Thibault Decker of Street Art for Mankind (SAM), and Fazzino. NRCA Vice President Lynn Green moderated the lively discussion, which included  the story behind the murals, and covered the various techniques the artists used to turn blank walls into memorable works of art.

Fazzino displayed a mock up of his own mural, which is to be installed on a wall at Pizzeria LaRosa, and the Deckers revealed that phase two of the #NRNYMurals is already in the planning stages, with another group of artists set to arrive in April.

NRCA collaborated with SAM on the #NRNYMurals, introducing the idea to the City of New Rochelle and assisting with fundraising. The NRCA has been a leader in creating public art for New Rochelle, from one of the first mural installations downtown – Steal Away by Jeff Schlanger, which was unveiled at 41 Lawton Street in 2008 — to the Fleur-de-Lis project in 2014 and the Pop-Up Libraries in 2019. According to NRCA President Theresa Kump Leghorn “NRCA believes public art is important because it enhances quality of life and brings art into the everyday experience of the entire community, while demonstrating civic pride and defining a positive sense of identity.” 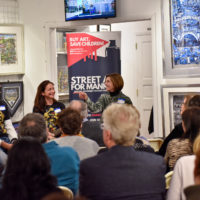 The New Rochelle Council on the Arts (NRCA) is a 501 (C)(3) nonprofit organization. Created by the New Rochelle City Council in 1975 to stimulate and encourage the study and presentation of the performing and fine arts, for nearly 45 years NRCA has worked to fulfill that mission by sponsoring art exhibitions, theatrical productions, dance recitals, film screenings, lectures, spoken word events and concert series. NRCA has also helped build relationships between the arts, the business community and city government. In addition to sponsoring special events like ArtsFest, NRCA established an exhibit space, the Rotunda Gallery, at City Hall and created the popular Summer Sounds Concert Series at Hudson Park, which offers an eclectic mix of free concerts all summer long. For more information about NRCA visit www.newrochellearts.org.