Barbara Davis, Dave Fabris and Catherine White are the newest members of the Board of the New Rochelle Council on the Arts (NRCA).

“We are excited to add new Board members who bring a diversity of talent and experience to the Board,” says Theresa Kump Leghorn, President of NRCA.

Created by the New Rochelle City Council in 1975 to stimulate and encourage the study and presentation of the performing and fine arts, for 46 years NRCA has worked to fulfill that mission by sponsoring art exhibitions, public art, theatrical productions, dance recitals, film screenings, lectures, and concert series as well as signature events like the Summer Sounds Concert Series at Hudson Park and ArtsFest. NRCA also created the NRCA Rotunda Gallery at City Hall, where it presents three exhibits each year, and has contributed to the city’s public art with murals – including the NRNY Murals created in 2019 —  and sculpture, as well as the Pop-Up Libraries. In addition, NRCA has facilitated collaboration among arts organizations, and helped build relationships between the arts, the business community and city government. For more information visit NRCA on the web at www.newrochellearts.org. 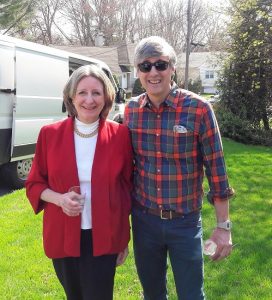 Barbara Davis is Co-Director of the Westchester County Historical Society (WCHS), a member-based, not-for-profit organization, that collects, preserves, protects and promotes the knowledge and understanding of Westchester’s long and remarkable history. Barbara also continues to  serve as New Rochelle’s City Historian, promoting the community’s heritage by conducting presentations and tours for schools and organizations and responding to scores of local history inquiries from all parts of the world. She is the author of two pictorial history books on New Rochelle, both produced by Arcadia Publishing Company, and was instrumental in developing the city’s Walk of Fame and History Hop projects.

From 2004 through 2020, Barbara was the Community Relations Coordinator for the New Rochelle Public Library, where her primary responsibilities involved the design, management and publicity of the library’s 2,000+ public programs, exhibits, and classes, as well as a wide array of social services.  Prior to that, Barbara’s career included being the first professional female Emergency Medical Technician in Westchester, and over the years she also held positions with the Yonkers School District, the Parks and Recreation Departments of Westchester County and the City of New Rochelle, the Reader’s Digest Foundation’s Tall Tree Initiative, and the Hudson River Museum. As a free-lancer, Barbara was a columnist with Gannet newspapers and a producer of exhibits, educational materials and videos. She operated her own catering firm for ten years and led an enterprise called “Waterfront Tours,” on Long Island Sound.

Barbara has been a member of numerous boards and committees in New Rochelle, and has served as the chairperson of the Westchester County Historic Preservation Advisory Committee for nearly 20 years.  Raised primarily in Pound Ridge, Barbara was a graduate of Fox Lane High School and she received her B.A. in Education from Goddard College. She is married to Steven W. Pappas, M.D., and they have one daughter, Morgan Pappas. 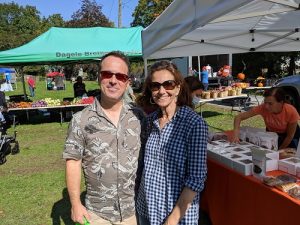 Dave Fabris is a musician and educator, accomplished as a performer of guitar, banjo and bass and as an instructor of guitar as well as an ensemble coach. Educated at the New England Conservatory of Music (jazz and third stream concentration), Dave was an instructor of guitar at Boston University before becoming an Adjunct Instructor of Music at Passaic County Community College and St. Thomas Aquinas College. In addition Dave is the Founding Director at Fabulous School of Music in Danvers, MA.

In the early 1990s Dave formed the band Mudsole, a New Orleans style brass and banjo ensemble, with a few New England Conservatory classmates. They busked on the streets from Boston to New Orleans and were featured on Entertainment Tonight in a national TV broadcast from Mardi Gras in New Orleans. The band also performed at the 1991 and 1995 Clinton Presidential Inaugural Balls.

As a freelance musician Dave appeared at the 2005 Tribeca New Music Festival in New York City with Impetus, a modern chamber group, and at jazz festivals in Sevilla, Spain; Guimaraes, Portugal; Antwerp, Belgium; Bordeaux and Perigueux, France with pianist Ran Blake. He has also performed with Bernie Worrell’s Woo Warriors; and G.U.T., an experimental jazz group. In 2008 Dave performed in the Pillowfight Theater festival (NYC) with Leslie Gore.

Dave has recorded four records (Hatology, Soulnote, NoBusiness, Lettuce Prey) and toured internationally with his mentor, third stream pianist Ran Blake, to great acclaim. He is also currently a member of the experimental big band, the Pittsburgh Collective, and the punk-cabaret trio IMPetus. Dave moved to New Rochelle in 2015 and has reformed Mudsole (to the delight of their new audiences in Westchester). He is married and the father of a beautiful little girl. 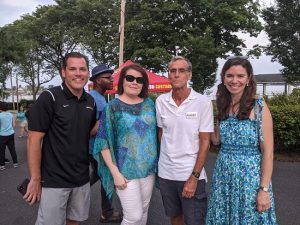 Catherine White is a 30-year resident of New Rochelle who is passionate about the City. She is currently the Executive Director of the New Rochelle Chamber of Commerce. Catherine and her husband own a brokerage firm on Long Island, so she understands the concerns of business ownership, the struggles to survive in changing economic situations, and the need to provide the best possible opportunities for your employees, while still trying to make a profit, and she brings that experience to her job.

A graduate of St. John’s University Catherine holds a BA in American Studies and English, and she has also built a successful career writing about local New Rochelle events and human interest stories as a photojournalist for the Hometown Media Group and other publications.

Catherine has volunteered with many New Rochelle organizations, not-for-profits and places of worship, including the Board of the Partnership for the Huguenot Children’s Library, the Board of the Friends of Sound Shore Medical Center, the Boards of several PTAs and as a member of the New Rochelle Fund for Educational Excellence. She was also a Troop Leader and Executive Board member for both the Boy Scouts and Girls Scouts. Currently she serves as a member of the Westchester County Reopening Task Force, a position to which she was appointed by County Executive George Latimer, and as an Advisory Board Member to the Thomas Paine International Historical Center. Most recently the New Rochelle Chamber of Commerce were singled out as “Best of Westchester 2021” for its work during the COVID pandemic.