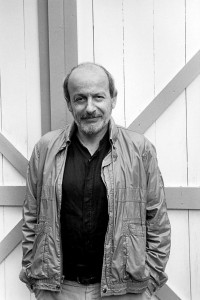 Mayor Noam Bramson and the family of beloved author E.L. Doctorow helped kick off a new initiative to honor the acclaimed author in the city that inspired his best-known work, Ragtime. The announcement was made at the New Rochelle Public Library on Saturday, March 12th following a performance by the author’s daughter Caroline Doctorow.

The Doctorow Legacy Initiative proposes to sponsor a public work of art that will be complemented by the creation of educational programs in Mr. Doctorow’s name and by a Heritage Award for his former home on Broadview Avenue. The committee — made up of representatives from the New Rochelle Council on the Arts, the New Rochelle Fund for Educational Excellence and the City of New Rochelle, plus City Historian Barbara Davis — says the proposed monument “will promote reading and literacy in the community — twin passions for Doctorow — and become a destination for those who admire Doctorow and his work, inspiring civic pride as well as providing an aspirational model for our young people.” Expected installation date is May 2017. The video can be viewed here https://youtu.be/nklHLV9HDcY

New Rochelle Mayor Noam Bramson said “New Rochelle is enormously proud of our long relationship with E.L. Doctorow.  Through this community initiative, we will honor a beloved resident, pay tribute to his extraordinary talent, and ensure that future generations in our city continue to draw inspiration from E.L. Doctorow’s remarkable life and work.”

Edgar Lawrence “E. L.” Doctorow (Jan. 6, 1931 – July 21, 2015) was an author, editor, and professor, known internationally for his works of historical fiction, including Loon Lake, The Waterworks, The Book of Daniel, Welcome to Hard Times, The March and Ragtime (named one of the 100 Best Books of the 20th Century). He was also a beloved New Rochelle resident, and Mayor Noam Bramson says he received many calls from citizens asking the city to honor the author after he passed away last July. Bramson appointed a committee to consider the most appropriate way to honor Doctorow’s legacy.

“There are numerous examples of “destination statues” of notable authors erected to honor them in their hometowns, “observed Theresa Kump Leghorn, President of NRCA and a member of the committee. Notable examples include statues of Edgar Allen Poe in both Baltimore and Boston, a life-size bronze statue of James Joyce in Dublin, a standing figure of F. Scott Fitzgerald in St. Paul, an abstract sculpture representing Ralph Ellison in Harlem, and a statue of Oscar Wilde composed of differently colored varieties of stone in Dublin. “Mr. Doctorow was inspired by his time in New Rochelle, and I think we all felt that he was such a world-renowned author that New Rochelle should find a way to celebrate him and honor his memory,” said Leghorn.

The proposed site is Huguenot Park, in the geographic center of New Rochelle: City Historian Barbara Davis notes “We believe this is the ideal location because of its proximity to Broadview Avenue, where the Doctorow family lived and which served as the inspiration for Ragtime.”

The New Rochelle Council on the Arts (NRCA), a 501 ©3 organization established in 1975, is acting as the lead agency for this project. With NRCA acting as the fiscal agent, donors will be able to make tax deductible contributions; NRCA will also oversee the selection process, issuing a Call for Artists later this month which will invite submissions from sculptors and artists. Installation of the completed work is scheduled for May, 2017. Visit NRCA’s website www.newrochellearts.org for the complete Call for Artists and description of the submission process.

The Doctorow Legacy Initiative will also include a literacy program being created by the New Rochelle Fund for Educational Excellence that builds on the foundation of its successful enrichment programs in the public schools. “The E.L. Doctorow Living Legacy Initiative will be comprised of two parts,” explains Steve Silverman, Co-Chair of the NR Fund: “One will focus on enriching efforts to ensure young people can read by the beginning of third grade; the second will engage high school students in creative workshops and panel discussions with authors and artists, focusing on developing students’ sense of self-expression.” NR Fund Director Sue Weisman says the new high school component, Authors Out Loud, will be modeled on the NR Fund’s poetry and arts programs in the elementary and middle schools, Poetry Out Loud and Arts Out Loud, and is expected to kick off in Spring 2016.

The third component of the Doctorow Legacy Initiative will be the installation of a Heritage Award plaque on the family’s former home on Broadview Avenue, which will take place later this spring.

The Doctorow Legacy Initiative’s plans were presented to the New Rochelle City Council this week and the group has already begun fundraising, writing grants and reaching out to corporations and individuals. There will also be a crowdsourced funding campaign with incentives for donations from $25 to $10,000. To make a tax deductible contribution with a credit card donors can visit www.newrochellearts.org or mail a check (with Doctorow Legacy written on the notes line) to NRCA, P.O. Box 211, New Rochelle, NY 10804.

Described as one of the most important American novelists of the 20th century, E.L. Doctorow’s works include the award-winning novel Ragtime (1975), which was inspired by Doctorow’s house on Broadview Avenue in New Rochelle. Ragtime was adapted for a 1981 film and became a Tony Award winning Broadway musical in 1988. Doctorow published TK books, including the novels Welcome to Hard Times, The Book of Daniel, Loon Lake, Billy Bathgate, The March and Homer and Langley, and was the recipient of numerous writing awards, including the National Book Critics Circle Award for Ragtime, National Book Critics Circle Award for Billy Bathgate, National Book Critics Circle Award for The March, and the American Academy of Arts and Letters Gold Medal for Fiction. President Barack Obama called him “one of America’s greatest novelists.”